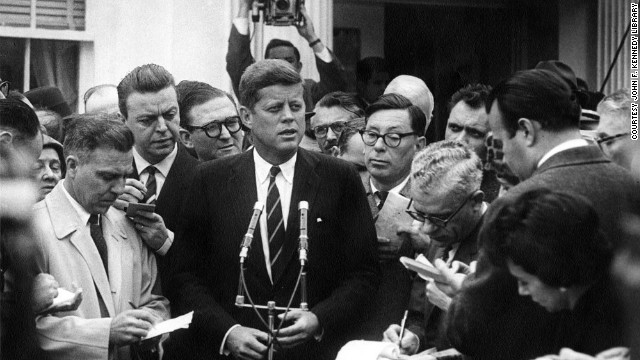 (CNN) - 72 years ago, when John F. Kennedy was just 23, he was visiting Minnesota with his parents and was invited on to a local radio show.

You’ll hear what he said about his aspirations – in his own voice – on this CNN Profile.

50 years ago this month, during the Cuban Missile Crisis, President Kennedy in the Oval Office, calmly questioned his generals and other advisors about his military and diplomatic options. The generals pushed for military action. With the very real possibility of a full scale nuclear war, you’ll hear how Kennedy handled himself. And you’ll hear the generals’ infuriated reaction when Kennedy left the room and the tape was still rolling.

When JFK was alone, recording his thoughts about a critical mistake he believed he made on Vietnam, you’ll hear him make an amazing transition from President to Parent, when his toddler John Jr. suddenly walks into the room.

JFK didn’t always keep his cool, as you’ll hear when he learned the U.S. hockey team was pounced by Sweden.

You will hear a lot of JFK’s voice in this CNN Profile – from tapes that had been collecting dust for many decades, until our guest, historian Ted Widmer, was given access, to sort through them and select audio highlights of JFK’s life in the Oval Office.

You’ll even hear a campaign song. Whatever happened to those?