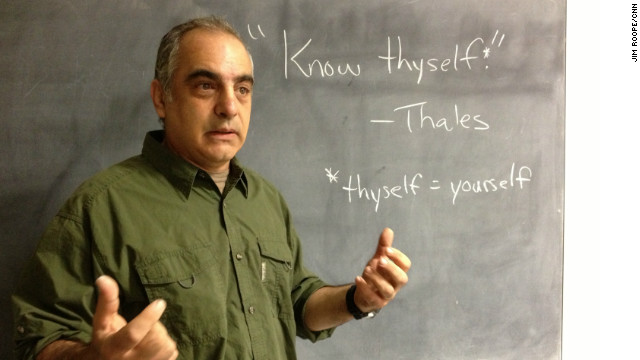 Before diving into academics, teacher Joe Marinelli gets the minds of his students warmed up with a thought-provoking quote.
October 29th, 2012
08:25 AM ET

(CNN) – In the four debates this election year, three presidential and one vice presidential, the subject of education was mentioned but not discussed to the satisfaction of most educators.

[:04] “There’s an old saying, I think it was Ralph Waldo Emerson who said, ‘I can’t hear your words, your actions are too loud.’”

Joe Marinelli has been a substitute teacher in the Los Angeles Unified School District for 19 years.

[:17] “So the omission of education in the debates is very loud to teachers. By omission in the context of this debate I mean education was not a topic. It was brought up here and there but it was not addressed and had an intelligent discussion about. It just wasn’t there.”

Education was mentioned a few times in the debates but not in response to a direct question about education. President Obama brought up the federal education reform initiative ‘Race to the Top,’ but briefly.

Many teachers are not happy with ‘Race to the Top’ or with Education Secretary Arne Duncan. The Chicago Teachers strike was partly about the failure of the policy.

Dr. Carol Swain is a Professor of Political Science and Law at Vanderbilt University in Tennessee.

[4:55] “It strikes me that neither candidate has a clear idea of what to do. Like we’re sort of stuck in a rut, we have been for decades.”

Swain says the problem is that although most people feel education is a priority, it is largely looked upon as a local issue. Yet the federal government is involved and educators feel it’s just not doing enough.