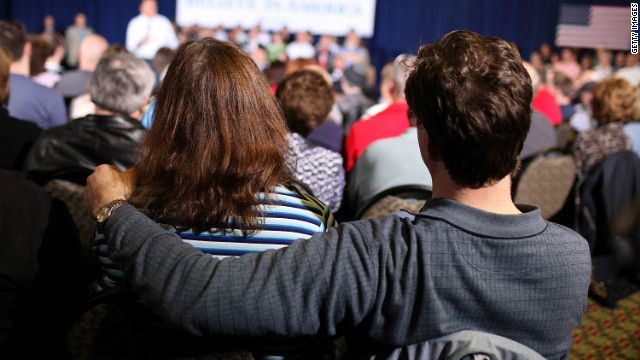 A couple listens to Republican candidate Mitt Romney on the campaign trail.
November 1st, 2012
10:39 AM ET

(CNN) – Loralee Choate and her husband, Jonathan, just had what Loralee believes is the biggest fight in their 14 years of marriage. And it was about politics.

[1:45] "I would say the biggest arguments in our marriage have been political."

She is a strong supporter of the Obama health care law, whose passionate blog about her life once got her and her husband invited to the Obama White House to talk policy.

Loralee swings left in other ways as well. Personally, she says she wouldn’t ever consider getting an abortion, but she doesn’t want lawmakers making that decision for other women. And she thinks government should assertively try to help the unfortunate.

Her husband Jonathan, is a libertarian who disagrees starkly, especially in his overarching view of government.

[2:24] 'I believe the reason we got to be a country that has all these things that we now want to distribute is by having free markets and it being the responsibility of individuals and charity organizations to take care of people.'

Jonathan runs his own business and co-hosts a political radio show called "For the People" on local station KNVU.

He and Loralee grapple with a real-couple example of a political divide that has shaped American politics since the 1980s.

And this year, polls indicate the gender gap could be historic. We've certainly heard about how the Obama campaign is counting on, possibly depending on, a large margin of victory among female voters. (An informed Obama campaign official told CNN  that they believe the have a double-digit lead among women.)

But what's fueling that gap? Loralee and Jonathan may shed some light. Her priority issues include gay rights and health care. Jonathan has only one top issue: the economy.

That same divide, over which issues matter the most, has shown up repeatedly in national 2012 polls, including Gallup's.

Editor's note: Listen to the complete story in the player above  to hear how Gallup looks at the gender gap and whether the male/female divide is solely an American phenomenon.