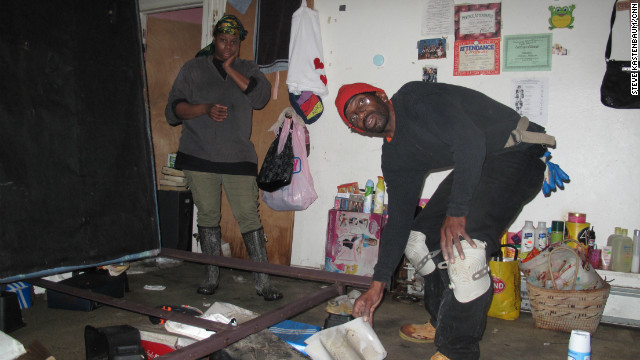 Erica Taylor and a friend are overwhelmed by the task of cleaning up her water logged apartment, home to seven children in the Rockaways section of New York.
November 3rd, 2012
08:41 PM ET

Relief from Hurricane Sandy slow for some

(CNN)  – One side of the Rockaways in New York received national attention soon after hurricane Sandy tore a path of destruction. Over 100 homes in the ocean front community of Breezy Point burned to the ground.

But, residents on the other side of the Rockaways are asking why it took almost a full week for a full scale relief effort to reach them.

[2:05] "I seen the Red Cross van came in and they didn't have anything on the van actually. No band aids, nothing, no water... nothing to help us, just driving through," said Lenny Theophile as he washed away salt water and mud from his first floor apartment.

It wasn't until Saturday morning that residents of the low income community on the east side of the Rockaways saw a well organized relief effort taking shape. Erica Taylor looked shell shocked as she and a friend cleaned out a wrecked apartment that was home to seven children.

People here complained that their better off neighbors in Belle Harbor and Breezy Point received help almost immediately while they were left to fend for themselves for several days. On Saturday, FEMA teams and other relief agencies were fanning out through their neighborhood.