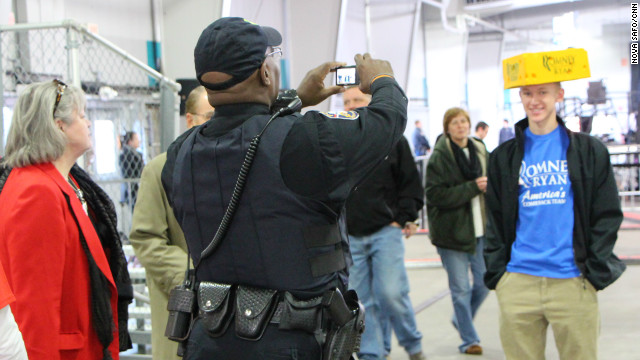 (CNN) – Wisconsin, split almost evenly between Obama and Romney, according to the latest polls – is one of the handful of swing states that will decide the presidential election.

So this past weekend, both candidates visited the state.

They aimed to convince remaining undecided voters, and to rally their base.

Speaking at the state fairgrounds in West Allis, Mitt Romney urged undecided voters to consider his and Obama’s records.

[2:18] "A lot of voters have known for some time who they're going to vote for. But there are others who are just now putting aside the demands of their daily life and considering how their vote will affect their own life. And we ask them and you to look beyond the speeches, the attacks and the ads. Look to the record. Words are cheap. A record is real and it's earned with real effort."

During the rally, the Republican Party stalwarts in attendance were also asked to give of their time in the last hours of the campaign – to make phone calls, knock on doors, and make sure that those supporting Romney get to the polls.

At President Obama's rally the following day in Milwaukee, that theme was repeated.

Turn-out will be a crucial factor in the election. A recent state poll from Marquette University in Milwaukee found Obama leading 51 to 43 per cent.

But the poll emphasized that if voters who are not paying close attention to the race choose to stay home on election day, the state would be a tossup.

That’s why Republican volunteer Marylin Stauter planned to be very busy leading up to election day.

[3:33] "We'll probably be out trying to knock on some doors this weekend and make phone calls. There will be people who are saying they're undecided. But when you actually push them up against the wall, and say when you're in that voting booth and you're all by yourself who are you going to be drawing that line for and voting for, and they will say – they will make a decision at that point."

Democratic volunteer Michael Morgan has also been talking to undecided voters. He described who accounts for undecided holdouts in Wisconsin.

To help answer those concerns, President Obama focused part of his message in Milwaukee on his accomplishments.

[6:27] "The American auto industry is back on top. Home values are on the rise. We're less dependent on foreign oil than anytime in the last 20 years. And because of the service and sacrifice of our brave men and women, the war in Iraq is over, the war in Afghanistan is coming to a close, Al-Qaeda is on the run, Osama bin Laden is dead."