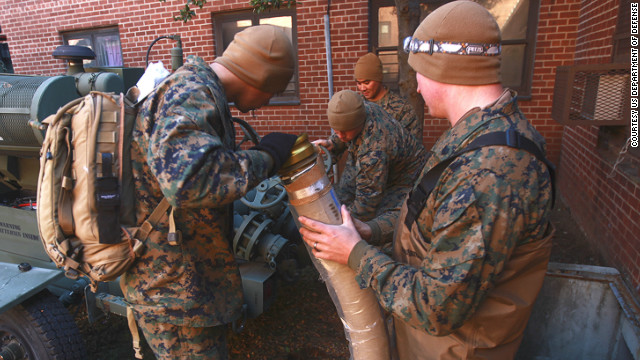 On Rockaway Beach, the troops have landed

The military has long been the backup for local and state responders in major disasters. What’s changed over time is who’s in charge.

For those Marines helping out in Rockaway Beach and Staten Island, the answer is: New York’s Governor, Andrew Cuomo.

New York National Guard Brigadier General Michael Swezey works for Cuomo, and he’s one of six people who has a rare power, the power to command both state and federal forces, if necessary, to deal with the aftermath of Hurricane Sandy.

We checked in with Swezey before the Marines arrived in New York to help out:

[1:06] "I actually have federal orders in my hands that will allow me to command federal forces if they’re required to come into New York State."

Working alongside Swezey is a U.S. Air Force colonel based at NORTHCOM, the unified command created on U.S. soil after the 9-11 terrorist attacks to protect the homeland.

The hand in glove coordination has been evolving over the past decade – but it took the calamity of Hurricane Katrina to push it. It took legal changes – and a lot more to bring about, says Col. Kenneth Ring, an Indiana National Guardsman who wrote a strategy paper on the topic when he was at Army War College. One thing that helped a lot Ring says: the way the U.S. manned the wars in Iraq and Afghanistan.

[4:51] "The last 11 years of war has had the National Guard and the federal forces working very closely together. Those interactions have built that trust and relationship – and that trust has carried back stateside."