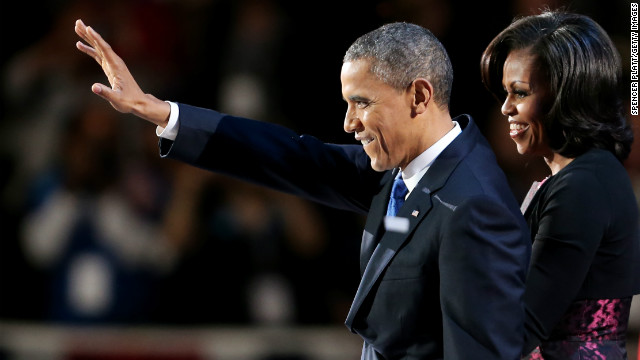 The sounds of victory...and defeat

(CNN)  - An emotional day followed the most expensive presidential election ever in the U.S.

But early Wednesday morning, after 1:00 AM Chicago time, supporters and campaign staffers for President Obama could finally breathe a huge sigh of relief; this long campaign and election was finally ending in victory.

There were loud cheers and tears of celebration as supporters like Arnie Filco realized what they had achieved:

[1:23] “We spent the day today making calls into the state of Wisconsin and the state of Iowa, to get people to come vote." Filco said. "It’s a great feeling. Because this election means so much to our country and the direction that we go.”

But a different set of tears was evident in Boston, where supporters of Mitt Romney had gathered to watch the election returns come in.

A little before 1:00 AM Boston time, Romney conceded the election to President Obama, wishing the president well in a speech that Romney supporters like Ron Naples of Philadelphia clearly weren't prepared to hear:

[3:46] "I'm really disappointed he lost this evening. I thought we had a real opportunity here to help start to shift the direction of the country. The last four years haven't been very successful in a lot of measures. And it's not clear to me what's going to change in the next four years to make it any more successful."

Editor's Note: What did it sound like at the moment the campaigns learned their fate? Our correspondents covered the election night events from both candidates' headquarters. In this report, they bring you the sounds and emotions of the final stage of a long and tiring presidential campaign. Listen to the complete story in the player above.