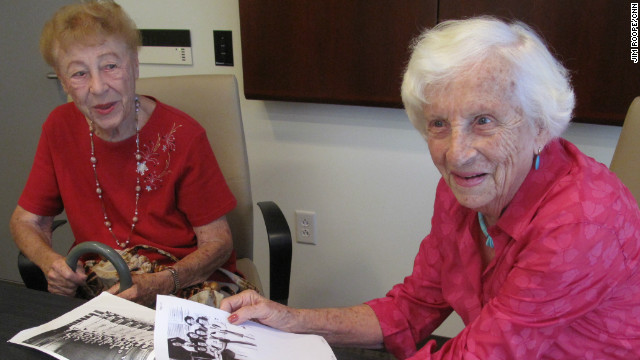 Florence Mast (left) and Doris Vick (right) reminisce about their WWII service in the Navy WAVES.
November 12th, 2012
10:13 AM ET

Vick joined the Navy at the age of 20 against her father’s wishes. Since her mother was an Army nurse in WWI though, her father was quickly convinced to give his permission.

Much of Florence Mast's family was already serving when she decided to join. Her father was in the Navy, her brother joined shortly after Pearl Harbor, and her husband was in the Army serving overseas.

When she signed up for the WAVES, Mast wrote her husband  to tell him of her decision. She says his response was less than supportive.

Both Florence and Doris went through boot camp at Hunter College in New York.

The two spent the war working in state-side hospitals.

Editor's Note: Here Florence and Doris'  story in the SoundCloud player above.