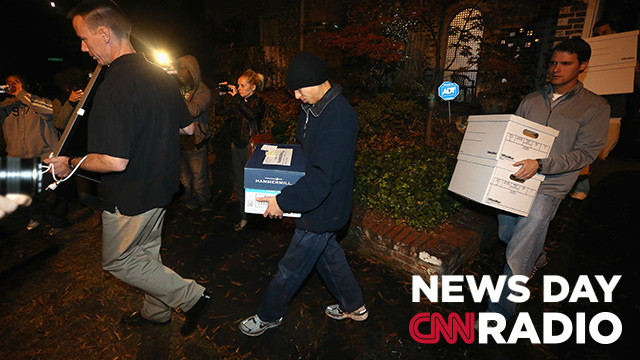 FBI agents carry out boxes after a search of the home of Paula Broadwell on November 13, 2012 in the Dilworth neighborhood of Charlotte, North Carolina.
November 13th, 2012
04:30 PM ET

The sex scandal that ended the career of CIA Director David Petraeus is expanding. Another prominent general is now involved, although the exact role he played is not yet clear. We learned today that General John Allen, the commander of U.S. forces in Afghanistan, is also under investigation.  The FBI is looking into e-mails he sent to Jill Kelley, a Florida woman who knew both men. CNN's Chris Lawrence reports:

"General John Allen was stationed in Tampa when he was at U.S. Central Command. So was General David Petraeus. Jill Kelly worked as a sort of social liaison for a lot of the commanders there."

Syria's civil war may have taken a back seat to last week's U.S. presidential election, but the carnage continues. In fact, election eve was one of the deadliest days in the 20-month-long war. Nearly 250 people were killed. CNN's Executive Editor, Tim Lister sat down with us to discuss his article on CNN.com about the path forward for Syria:

"...this meeting that's just happened in Doha, in Qatar became really important because that brought together all sorts of factions within the Syrian opposition, including the Syrian National Council."

Republican governors have until the end of the week to decide if they want to set up a state exchange as part of  the Affordable Care Act, also known as Obamacare. If they opt out, the federal government will set up exchanges in their states. But, at least one advocacy group says these federal exchanges could be a new way to challenge Obamacare in court. Bill Wilson, the president of Americans for Limited Government, a states' rights group,  says all the governors should just say "no" to setting up a state exchange:

"I think the bolder assertion of tenth Amendment right is to tell the Fed to 'shove it' and not do it. "