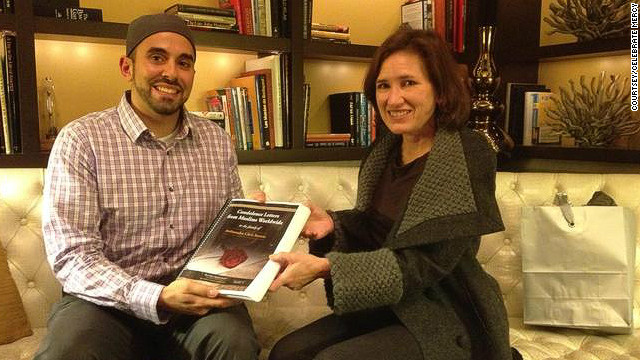 (CNN) - In the weeks since Ambassador Christopher Stevens was killed in Benghazi, Libya, a debate has raged over the Obama administration's handling of the tragedy.

Quite apart from those pointed questions and hearings on Capitol Hill, another discussion is happening. One that got its start when Tarek El-Messidi decided to put out a call for letters of condolence:

[1:53] Our initial goal was only one thousand letters in ten days.

El-Messidi put out the call from his organization Celebrate Mercy. He started the group to help foster understanding about Islam and the Prophet Mohamed:

[1:32] "I think I was very worried and a lot of Muslims were very worried that they would attribute his death the teaching of Islam."

The letters poured in. They received over 7,000 from 115 different nations. El-Messidi wasn't the only one touched by this outpouring.

Dr. Anne Stevens, Ambassador Stevens's sister, heard about the letters and reached out to El-Messidi.

Two weeks ago the two met. El-Messidi brought along all those letters, bound in a two-inch thick book. Stevens says she'll carry the book with her when she visits family for Thanksgiving.

[2:12] "To think that people we didn't even know were writing us letters of condolence just because they were so touched by the death of my brother was really very touching."

Stevens and El-Messidi both say they hope the Ambassador's legacy of forging relationships of dialogue across cultures will not be forgotten. As El-Messidi puts it:

[5:28] "Without sitting down at the same table without having a human dialogue there's not going to be peace in the world."