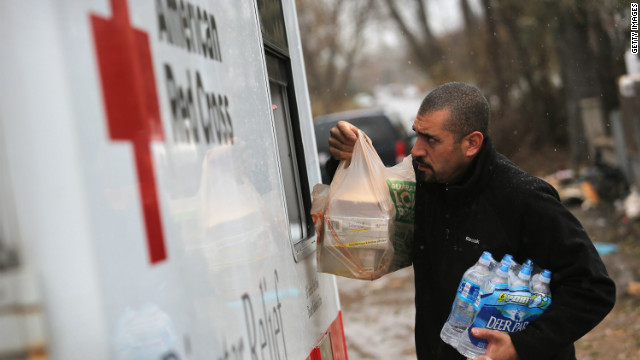 (CNN) - At a time when people needed help right away, some in areas hit hard by Superstorm Sandy were asking, “Where is the Red Cross?”

The nation’s largest relief organization was coming under fire as it struggled to deal with the enormity of the disaster and the challenges it posed.

[1:43] “It just took us a little while for us to get into some of those neighborhoods,” said Red Cross spokesperson Anne Marie Borrego. “We were dealing with flooding and downed trees and traffic snarls like many other New Yorkers. So it did take us a while I would say to get to some areas. But we have been on the ground since the beginning and are we everywhere we want to be right now? No. But we are everywhere we can be with the resources that we have.”

Did the Red Cross do a poor job of managing the response in those first few days, or were expectations set too high for the premier relief organization in the US?

It depends on who you ask. Borrego says in a relief effort this large they can’t meet everyone’s expectations.

[3:08] “So sometimes we do sort of have to explain what we do... Sometimes there’s a little bit of education on our part.”

But some Red Cross volunteers think the agency could be more effective if it showed more flexibility in adapting to the changing needs of storm victims over time.

Patrick Thrasher volunteered in the Rockaways section of New York as a leader for his company’s Red Cross response team.

[5:42] “So they have hundreds of volunteers wanting to help and they are shunting them into kind of a response mechanism that might have been useful ten days prior but not now.”

Thrasher was surprised by some basic management issues that still existed two weeks into the relief effort such as phone numbers of key organizers not being readily available to teams on site. He hopes the Red Cross will embrace the constructive criticism.

Borregao says they welcome it as they look for the gaps in their relief effort and work to do a better job next time.