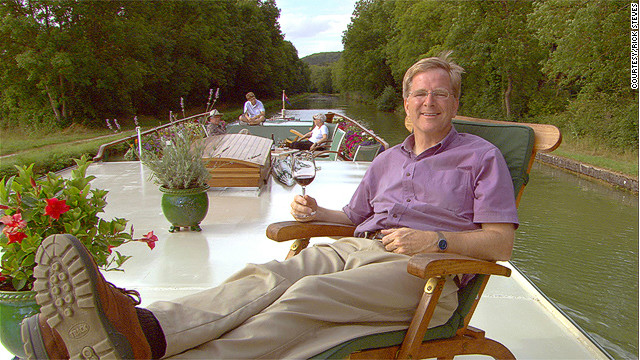 Travel writer Rick Steves can pinpoint the moment he decided on his career path.  He was traveling in Europe as a teenager with his parents when it hit him.

[:30]"I remember being in the Copenhagen train station seeing kids a couple years older than me with rucksacks and Eurail passes, no parents and Europe was their playground and I thought I don't need you mom and dad."

Then and there Steves pledged he'd go back every year. It's a promise he's made good on through a simple premise.

[:55]"Others could learn from my mistakes rather than their own and have a better trip and I could have an excuse to go back to Europe every year and update my material."

Steves has turned this idea into a travel empire. His guidebooks have sold millions of copies, he has TV specials and a weekly radio program. He now divides his time spending about four months of the year in Europe researching,  the rest of the year he's super grounded.

Edmonds, Washington is Steves oasis. It's his springboard to the rest of the world.  But,  his time in the United States is as much marked by political activism as it is by the comforts of home.

Among other things, Steves is a passionate advocate for the legalization of marijuana. He argues that American drug policy is costly and counterproductive.

[3:07] "Drugs are not healthy. They are not good for you. They can be addictive.  They can be abused. But, I don't think we should criminalize things for adults just because they are not appropriate for children.

Steves sees marijuana as a civil liberty. This year voters in his state agreed with him. It's a victory he's excited by, but it won't mark an end to his political work.

Increasingly Steves sees his work as a travel writer as linked to political discussion and debate.

[3:49] "I find that you can leave our country and look back at it and see it in a higher contrast and see things that we should address."