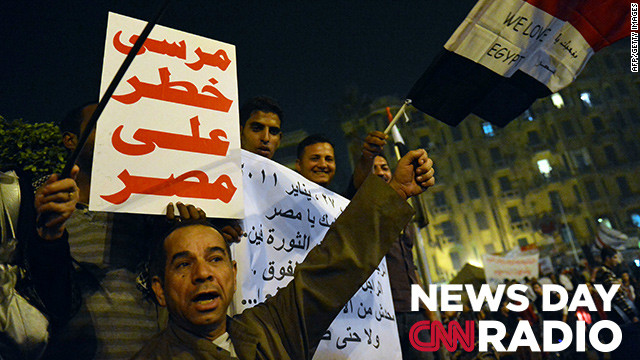 Tens of thousands of Egyptians protest in Cairo’s Tahrir square against a draft constitution. Writing on placard reads 'Morsey is a threat to Egypt.'
November 30th, 2012
04:30 PM ET

Scott MacLeod, Managing Editor of the Cairo Review of Global Affairs says people are correct to be concerned.  "For example the military can still hold military trials for civilians," MacLeod said "it's putting a band-aid on the old constitution instead of really reforming the old constitution."

When she discovered the truth, that the people who raised her were part of the regime responsible for her parents death, she was shocked.  "It took me several years to assimilate my new identity, and find peace about my true background. " Activists hope the trial will help bring closure for people like Montenegro.

Not only did the album make Jackson a star but she says it changed the entire industry. “[Thriller] changed the way people viewed music in terms of wanting it to be more entertaining and wanting artists to push themselves to the next level,” France says.