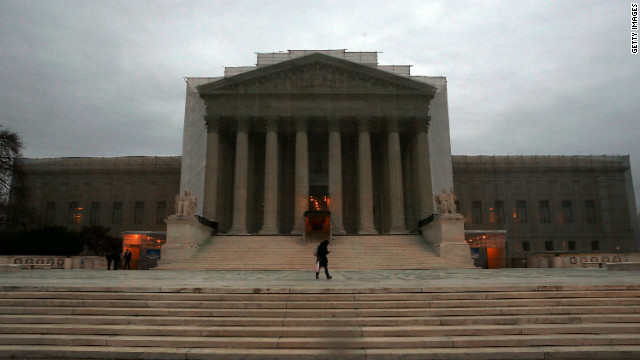 December 7, 2012, 2012 in Washington, DC. The Supreme Court announced on Friday that it will take up cases on whether same-sex marriage should be banned in California and whether legally married gay couples can get the same federal benefits as heterosexual couples
December 9th, 2012
06:00 AM ET

(CNN) – Welcome to the CNN Soundwaves Sunday Playlist, a compendium of some of the best podcasts from other producers that we're listening to.
A simple, one-page order may usher in an historic decision by the U.S. Supreme Court: whether single-sex couples have the constitutional right to marry.
On Friday, the court said it will review the matter of same-sex marriage  just weeks after voters approved the issue in three states. Oral arguments will likely be held in March with a ruling by late June.
The federal Defense of Marriage Act, or DOMA, which denies federal benefits to same-sex couples legally married in their own state, is one appeal the court will hear. The other involves California's Proposition 8. The referendum, approved by voters in 2008, rescinded the right of same-sex marriage previously approved by California's courts.

"When it passed a law allowing marriage between persons of the same-sex in 2003, Belgium became only the second country in the world to legalize same-sex marriage. Unlike in France, the move did not spark a controversial debate or encounter staunch opposition. Today, same-sex marriage is generally accepted by the public and political class in Belgium."

That's it for this week's Sunday Playlist. Consider it a little food for thought about same-sex marriage.