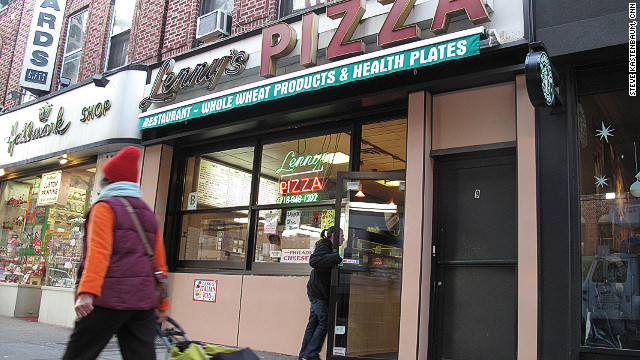 Lenny's Pizza on 86th Street in Bensonhurst, Brooklyn as it stands today. Featured in the opening scene of Saturday Night Fever, it introduced audiences to the neighborhood that served as a backdrop for the movie.
December 15th, 2012
11:31 AM ET

(CNN) – Saturday Night Fever was released 35 years ago this weekend. The iconic movie played a large part in defining the music and fashion of a generation.

Bensonhurst, the Brooklyn neighborhood it was filmed in, was just as much a character in the film as John Travolta’s Tony Manero.

CNN visited Bensonhurst to explore Saturday Night Fever's local legacy, and find out how the neighborhood has, and hasn’t, changed.

Felecia Delandro has lived in Bensonhurst for 48 years.

[2:37] “Back then people were kind of different and close with one another and everybody knew each other. You’d walk down the street and you just kind of knew everyone. It’s not really like that anymore. There’s still some people here from the old days but it’s not as tight knit as it was.”

Angelo Petratos still works at the neighborhood card shop his parents ran when the movie was being filmed.

[3:04] “People still talk about it. There’s a group, a base that still remembers that movie. I have two kids and I pass that on to them. I talk to them about John Travolta and about that movie."