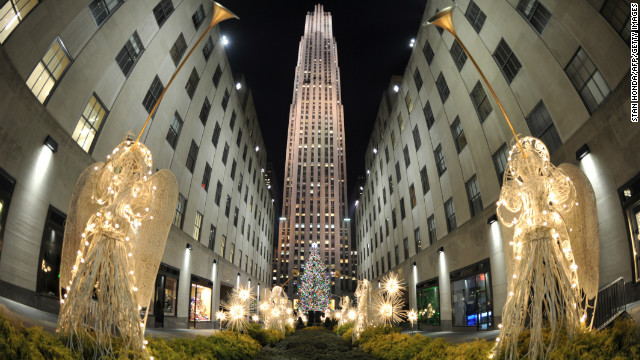 (CNN) - Welcome to the Sunday Playlist, sounds and stories we've discovered from other audio producers and that we want to share with our listeners.

This week's Sunday Playlist, the best Christmas and Hanukkah stories from around the web.

But first, a look back at some of the more thoughtful pieces centered on last week's horrific shooting in Newtown, Connecticut.

The killings tore an emotional gash through the nation's psyche, and sparked new conversations on issues like gun control and mental health.

Here are a few selections that rise above the rhetoric, and get you thinking about our humanity, our culture, and the way we're wired:

And now on to some of our favorite stories for the holiday season:

Every year since 1932, Britain's monarch has broadcast an annual Christmas Day speech to the Empire. King George V started the tradition using radio to deliver the first message. In 1957, Queen Elizabeth delivered the first televised Christmas message. This year the Queen produced the very first 3D Christmas message that will be broadcast on Christmas Day. You'll be able to see it on the Royal's YouTube channel. And that first radio broadcast 80 years ago by King George V was written by Rudyard Kipling. An excerpt is below via AudioBoo. Or check it out in its entirety on this page.

On NPR's Morning Edition in 1992, David Sedaris debuted what's become an annual holiday hit on public radio. It's his biting satire recalling his time working as a department store elf at Macy's. If you haven't heard it before, don't let another Christmas pass before you hear Sedaris doing a spot-on impression of Billie Holliday singing, "Away in a Manger." [6:54 in the clip below]

Staying with NPR a bit longer. For over 20 years, NPR has produced its annual Hanukkah Lights special, presenting stories and original fiction with stories "inspired by the oil that miraculously burned in the temple for eight days and nights." The excerpt below is from the story, "Hanukkah at Tiffany's" by writer Leslea Newman, and read here by NPR's Susan Stamberg:

Finally, one more bit of storytelling for the season, this time from Truman Capote. In 1956, Mademoiselle magazine published the short story by Capote. Set in the South during the Depression and largely autobiographical, the story describes a friendship between a seven-year-old boy and an elderly woman and ultimately illustrates the value of giving during the Christmas season.

An excerpt is below.

To hear an abridged version of the story read by the author himself, check out this episode of This American Life.

That's it for today's Sunday Playlist. Check back next Sunday for a look at the upcoming week's best podcasts.

We all hope that you have a happy and healthy holiday.