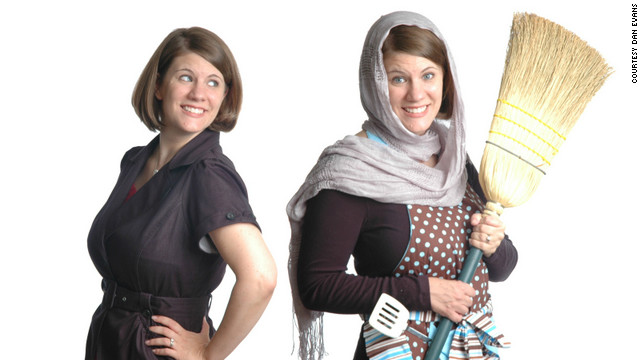 (CNN) - Something tells me if Rachel Held Evans were my childrens' Sunday School teacher they'd never want to miss a Sunday.

Evans is an evangelical Christian and my family is Jewish.

Evans lives in the town where the term Bible Belt was coined* and my father was a professional standup comic who worked the buckle of the Borscht Belt in New York's Catskill Mountains.

But Evans bridges the divide between the belts in her new book, The Year of Biblical Womanhood, the result of an experiment in which she lives the Old and New Testament's instructions for women as literally as possible for an entire year.

As Evans tells us in this week's audio show, CNN Profiles, she aims to "teach the gospel of Jesus with humor." That's hard to do without offending some people. So Evans does have her critics. But she has an ark full of followers.

When I hear the word testimony I think trial. But when you're an evangelical, testimony is about your relationship with Jesus. Evans recalls giving hers when she was a teenager and doing so well a boy at her church told her: "That was great testimony. You're a great speaker. Too bad you're a girl."

What he meant was that she would have few opportunities to use her speaking and inspirational skills in the Church hierarchy.

But in the internet age, Rachel Held Evans has a platform.

As she tells us on this CNN Profile, she loves the Bible, but doesn't like it when people use the Bible to keep women in their place.

That's what led her to live and write The Year of Biblical Womanhood. Or, in the words of the subtitle, "How a Liberated Woman Found Herself Sitting On Her Roof, Covering Her Head, And Calling Her Husband Master."

That reminds me of a great Borscht Belt joke about the Jewish guy who marries a Christian convert to Judaism which you can also hear in this CNN Profile.

* The term Bible Belt is believed to have been coined by journalist H.L. Mencken when he was covering the battle over teaching evolution in the Scopes "Monkey Trial" in Evans' home town of Dayton Tennessee.