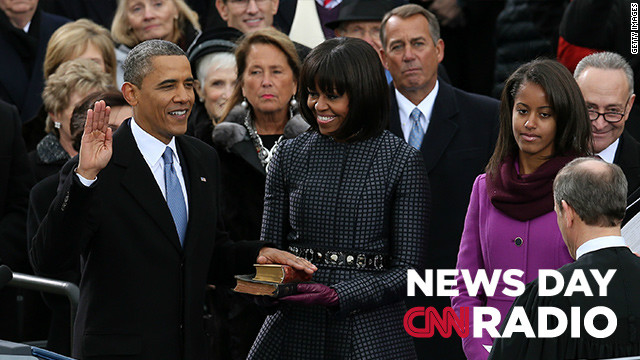 U.S. President Barack Obama is sworn in by Supreme Court Chief Justice John Roberts as First lady Michelle Obama and daughters, Sasha Obama and Malia Obama look on during the public ceremonial inauguration on the West Front of the U.S. Capitol January 21, 2013 in Washington, DC. Barack Obama was re-elected for a second term as President of the United States. (Photo by Mark Wilson/Getty Images)
January 21st, 2013
05:01 PM ET

"America will remain the anchor of strong alliances in every corner of the globe, and we will renew those institutions that extend our capacity to manage crisis abroad, for no one has a greater stake in a peaceful world than its most powerful nation."

"They had plastic explosives strapped around their neck.  That they were bound and gagged."

"I think that's just awesome and I think that MLK would be so proud that his (President Obama's) second inauguration landed on his holiday."