Pope resigning: what it means

(CNN) – For the first time in 600 years, a pope is retiring. Pope Benedict XVI says at the age of 85 he just simply doesn’t have the energy to lead the flock. What does this mean for the Church?

[:33] “You have an opportunity for new blood to come in, new thinking, new ways of looking at how the church can be relevant in the modern world.”

END_OF_DOCUMENT_TOKEN_TO_BE_REPLACED 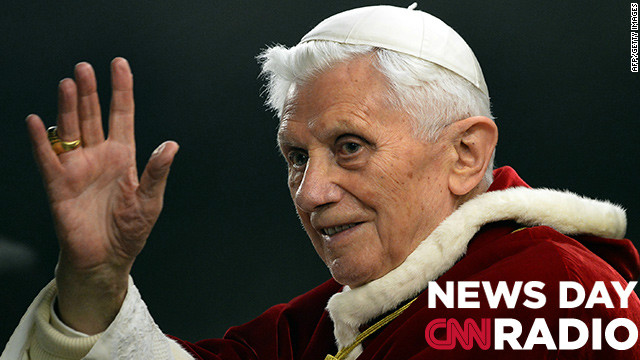 "In terms of his successor I don't think that there's going to be a significant transition... I would be surprised if we were to see something very different in our next pope because, after all, we want an element of continuity as this has come as quite a shock," says Madelaine Teahan, associate editor of Britain's 'Catholic Herald', a London-based Catholic newspaper. END_OF_DOCUMENT_TOKEN_TO_BE_REPLACED

Southern states arm themselves for a gun fight

(CNN) - President Obama's State of the Union address is expected to focus on the economy, but guns will also be a focal point even if the issue isn't addressed in words.

Around 20 House democrats have announced they will bring people affected by gun violence to the speech, and Republican Sen. John McCain has invited Gabrielle Giffords and her husband Mark Kelly to be his guests.

The speech comes just a week after the second wave of state legislative sessions kicked off, and a slew of gun related bills have hit statehouses across the country. In the Northeast, many states are pushing for stricter gun control, but in many states, mostly in the South, lawmakers are pushing legislation to block any federal gun control measures that may be passed in Washington.
END_OF_DOCUMENT_TOKEN_TO_BE_REPLACED

Chicago, Illinois (CNN) - Hadiya Pendleton, 15, was laid to rest on Saturday following a funeral in which her family struggled to keep national politics from overshadowing her memory.

The funeral was attended by numerous political figures, including Michelle Obama. Pendleton was shot just one mile from the Obamas' Chicago home, and an online petition urged the president to visit his hometown to address the gun violence. Late last week, the White House announced that not only would the first lady attend the funeral but that President Obama would visit Chicago this week to talk about gun violence there.