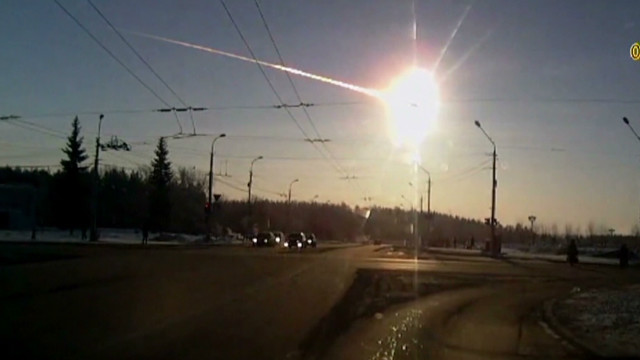 'A screaming comes across the sky'

(CNN) - When I saw the images of the meteorite that screamed across the sky this week over Russia's Ural Mountains, it immediately brought to mind that opening sentence in Thomas Pynchon's classic, Gravity's Rainbow.

This week's passing asteroids and crashing meteorites inspire a review of audio stories having to do with outer space.

Have you ever wondered what astronauts in space hear all day while orbiting earth? Wonder no more. We have this recording of an average day on the International Space Station recorded by ISS Commander Chris Hadfield:

Not impressed? Here's some other space-based programming:

This episode of the BBC's panel discussion program tackles the vexing concept of the nothingness that makes up outer space. Settle in for 43 minutes of pretty heady talk about...well, nothing.

Actually, there is something there. The In Our Time website explains that, recently "physicists have realised that the vacuum is not as empty as we thought and that the various vacuums of nature vibrate with forces and energies, waves and particles and the mysterious phenomena of the Higgs field and dark energy."

Some people don't care about what's in (or not in) space and and just look for a piece of it here on earth. Ruben Garcia is one of those people. He hunts for meteorites in a huge dry lake bed in southern Arizona. It's his favorite place to find pieces of space rocks. The lake bed is 50 square miles and it's been there for thousands of years. Garcia reasons that makes it a good place to locate objects from space - it's had a long time to accumulate meteorites.

Speaking of rare sitings of space objects, back to Thomas Pynchon, the author of books like The Crying of Lot 49, Mason & Dixon, and the one mentioned earlier, Gravity's Rainbow. He's notorious for avoiding the public eye; his sitings are about as common as Asteroid 2012 DA14's.

A little Googling uncovered this CNN.com story about Pynchon from 1997. And if you're in a star-hunting mood, watch this vintage CNN report about Pynchon. The reporter claims that Pynchon can actually be seen in the video; but CNN agreed to Pynchon's request that he not be identified. See if you spot him. Like hunting for a shooting star.