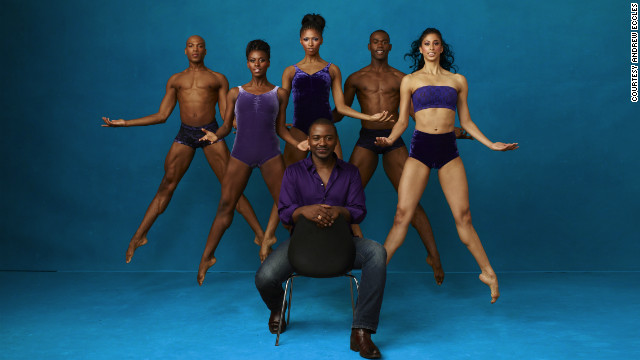 (CNN) - We parents would love to know what inspires a child to find his or her calling in life.

We even get tempted to choreograph their journey.

But life cannot be choreographed. If it could be, then a little boy named Robert Battle probably would not have begun his childhood so bow-legged he had to sleep with braces.

That is not the way you begin to choreograph the life of a choreographer and dancer.

Battle fell down a lot as a child.

Most importantly, he learned how to get up.

And, as we learn in this CNN Profile, falling down and getting up, with power and elegance, is at the heart of modern dance.

And no dance company does it with quite the grace and athleticism of the Alvin Ailey American Dance Theater.

Ailey & Co is performing in Miami this weekend, where Battle grew up. They'll be in more cities across the country over the next few months.

Robert Battle will be with them every step of the way.

He was recently chosen as the company's third artistic director in 55 years.

As a child, Battle's mother could not care for him so he was taken in by his extended family.

There was the woman who essentially became his mother, an English teacher who played piano at the local AME Zion Church and who also ran an African American troupe that performed poetry and songs related to the black experience.

Battle soaked it in. And he pretended a lot - making believe he was performing in front of large audiences, reciting poetry, preaching, playing pieces he'd learned on the piano.

It wasn't until his adolescence that he stumbled upon dance through a friend who was studying ballet.

At one point in our CNN Profile, I asked Battle if he has ever come across choreography that is just too physically punishing for his dancers - one he would not let them perform for their own good. You'll know why I asked this if you see an Ailey performance in person.

"Dancers thrive on challenges," he answered. "You don't want to rob them of that ... Because then the message will seem to be 'oh, you can't do that.'"

Perhaps that is the question for us parents.

How do you raise a child to thrive on challenges, a child who believes falling down is a prelude to rising up?

How do you raise a child with the spirit of Robert Battle? Listen to this CNN Profile to find out.