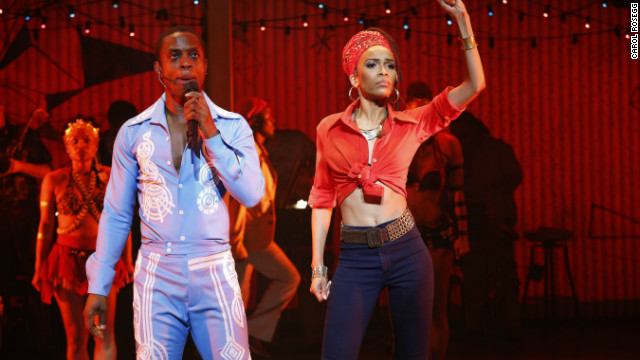 Editor's Note:  Welcome to CNN Radio Music Notes - your backstage pass to all things music!  From intimate conversations with headliners to the latest scoop on your favorite Indie band, hang out with us to find out what's happening in the world of music.

The 3-time Tony Award-winning musical is in Atlanta through March 6th  and Michelle stopped by CNN Radio to talk about FELA!,  her friend Beyoncé, and some personal revelations about how she took charge of her own destiny after suffering though some dark times.

Destiny's Child made her famous, but even before the group existed, Michelle Williams knew she would be a star. She remembers being in the Fox Theater in Saint Louis for an 8th grade trip and looking up at the beautiful art on the ceiling and saying, "one day I'm going to perform here." And eventually, she did.

You won't find any inkling of  star-trappings with Williams. She came by CNN Radio without a huge entourage, no superstar demands. Just a fun-loving attitude, even though it was early in the morning. Fashionable in a yellow and blue African print mini-dress, crazy six-inch suede boots that made her long legs look even longer, and a dazzling smile.

I asked her how she ended up in the Broadway tour of FELA!. She says, once again, it was destiny:

[0:52] "I had auditioned for another Bill T. Jones production...in the meantime I got the phone call saying 'they really enjoyed you. They want you to go on tour in FELA! right now.' I've seen FELA twice. I happened to be in London the same time it was opening...so I went to London's opening night. And I remember sitting there saying, 'there's no reason why I am not in this show.'"

Michelle also talks about her Destiny's Child Super Bowl half-time show reunion with band mates Kelly Rowland and Beyoncé. Although it was a closely guarded secret, it was heavily rumored the reunion would take place:

[4:28] "We had such a good time. We had known for a couple of months that we were going to do this so we kept it a secret until somehow the information got leaked."

Michelle also gives us a little insight into what drives Beyonce and how she's adapting to being a new mom. And, finally Michelle talks candidly about her battle with depression.

[10:06] "I didn't know that I would talk about it. It just happened to come out in an interview that I did. When I sit back and I think about it I just say,'maybe it was time for you to talk about it.' And, so many people have (said) thank you for talking about it."