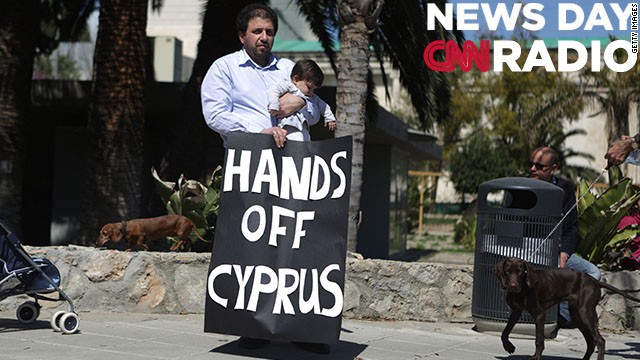 Cypriots protest outside the parliament building in Nicosia, on March 18, 2013. Cyprus President Nicos Anastasiades was seeking the backing of MPs for an EU bailout deal that slaps a levy on bank savings under harsh terms that have jolted global markets and raised fears of a new eurozone debt crisis.
March 18th, 2013
04:28 PM ET

""Not only are the Cypriots enraged, you've now got the Italians and the Spanish deeply anxious that they could follow the same fate."

END_OF_DOCUMENT_TOKEN_TO_BE_REPLACED

Same-sex marriage fight in New Jersey not over

(CNN) - As the Supreme Court prepares to consider two landmark same sex marriage cases, gay rights advocates are targeting New Jersey. Their goal: to override Governor Christie's veto of a bill that would have legalized marriages for same sex couples.

Troy Stevenson, executive director of the gay rights organization Garden State Equality claims they are getting closer to achieving their goal with each passing day.

[2:10] "We need 27 in the Senate and 54 in the Assembly to override... we need 3 more Senators and 12 more Assembly people," said Stevenson. END_OF_DOCUMENT_TOKEN_TO_BE_REPLACED