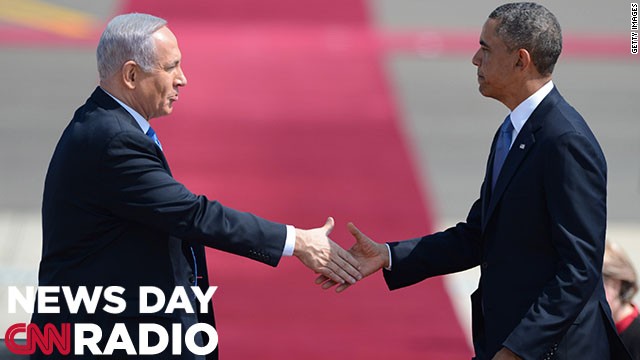 US President Barack Obama is welcomed by Israeli Prime Minister Benjamin Nethanyahu at Ben Gurion International Airport on March 20, 2013 near Tel Aviv, Israel. This will be Obama's first visit as President to the region, and his itinerary will include meetings with the Palestinian and Israeli leaders as well as a visit to the Church of the Nativity in Bethlehem.
March 20th, 2013
05:10 PM ET

"The real purpose of this visit is not just to do policy, but to really reach out to the people of the Middle East, and to demonstrate that the United states is still committed to the Middle East, on a number of issues..."

"There's a lot of finger-pointing going back and forth, when you talk to some chemical weapons experts they say 'I don't see enough conclusive evidence in th little amount of video that's been released by the Syrian government to concretely point to the fact that some kind of neurotoxins were used in this town'."

"Going back into trucking, just knowing the kind of people who work in that industry, a lot of those companies are based, you know, head-quartered in the South, run by men who are Southern men, essentially. And that's why I feel it's necessary to go back into the closet and to camouflage myself and just play the straight guy roll, and... I can do that."

"Subscribe to this podcast on iTunes or Stitcher. And listen to CNN Soundwaves on our SoundCloud page"