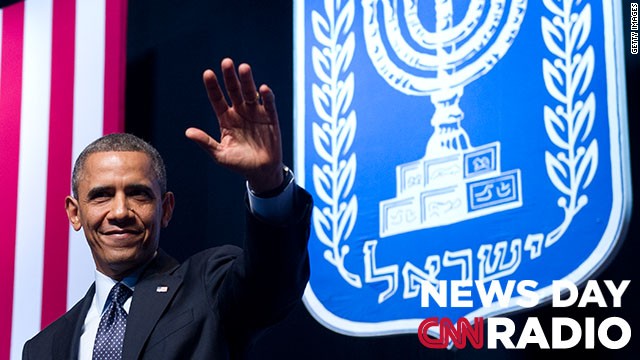 US President Barack Obama waves after speaking on US, Israel and Mideast relations at the Jerusalem Convention Center in Jerusalem, on March 21, 2013, on the second day of his 3-day trip to Israel and the Palestinian territories.
March 21st, 2013
04:32 PM ET

"The majority of Israelis actually do want the Palestinians to be able to form their own state, they do recognize that peace between these two neighbors who live so close together, so tightly inner-woven in so many ways, has to happen in order for the people here in Israel, in order for the Jewish people, to be able to live peaceful lives."

"If you've got your money invested in a bank in Spain or Italy or Portugal or Ireland,  you're gonna go, 'Well, if they can do that, they'll do it again', and suddenly you've got runs on banks in bigger economies."

" You wonder about your neighbors and you want to know what's happening in their lives. And that there's this tragedy that I couldn't seem to put a finger on how my new community was feeling that, and what was being done."