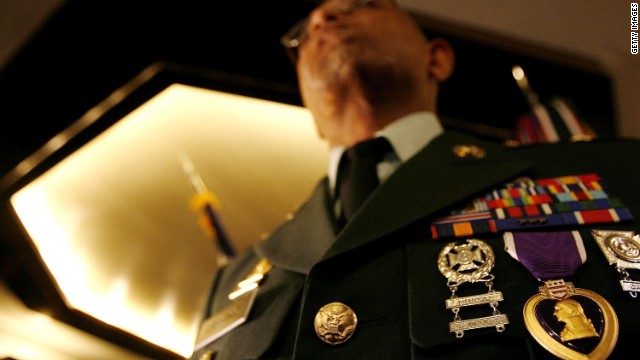 Sgt. Tyrone Carelock wears the Purple Heart medal for wounds suffered while serving in Iraq during a ceremony November 1, 2006 in Washington, DC.
March 22nd, 2013
09:59 AM ET

(CNN) - "One thousand four hundred sixty days is the number of days I've been waiting for the VA to process my appeal."

That's the sentiment of veteran Jacob Worrell who spent 16 months in Iraq as a sergeant and team leader for the 172nd Striker Brigade.

When he left the Army, he filed a disability claim with the Department of Veterans Affairs for help with the medical problems and the post-traumatic stress disorder he brought back. That was 6 years ago.

Worrell's in Washington this week with dozens of vets who are lobbying lawmakers and the White House - asking them to fix the government agency charged with taking care of the nation's veterans.

The VA has about 600,000 veterans' claims waiting to be dealt with.

And they are waiting a lot longer for help - in a very tough economy. The number of vets who wait for more than a year for an answer from the VA shot up from 11,000 in 2009 to 245,000 last year. The Center for Investigative Reporting compiled those numbers.

Lincoln Capstick served in Iraq and now he uses a wheelchair and leg braces because of his injuries there.

He fought a paperwork battle over disability payments with the VA for six years. His electricity got cut off and he racked up credit card debt. And he grew demoralized, fighting the same government he had fought for:

[4:21] "There were sometimes where it was pretty forlorn and I didn't know if it was worth the struggle. I couldn't see my future – I could see all the pressure and stuff and I started to feel like a burden on my family. Just the lack of help coming from the government just – if it weren't for the fact that I was still doing Reserve duty, I don't know if I'd still be here today."