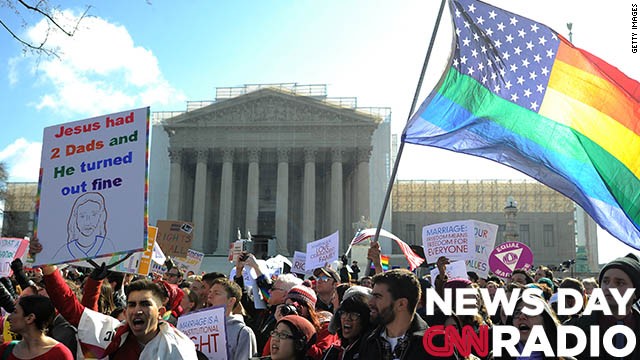 Same-sex marriage supporters shout slogans in front of the US Supreme Court on March 26, 2013 in Washington, DC. The US Supreme Court on Tuesday takes up the emotionally charged issue of gay marriage as it considers arguments that it should make history and extend equal rights to same-sex couples.
March 26th, 2013
05:30 PM ET

"This was a deeply divided Supreme Court, and a court that seemed almost to be groping for an answer here."

"We had some sense of how Kim Jong Il, the former leader, operated, but there's a lot we don't know about the current leader. And his actions have really been ranging far beyond what we've seen in the past with North Korea."

"They're saying 'let's create our own fund...our own pool of money to help us develop our own infrastructure projects for example'. That's why there is this push for a BRICS development bank."