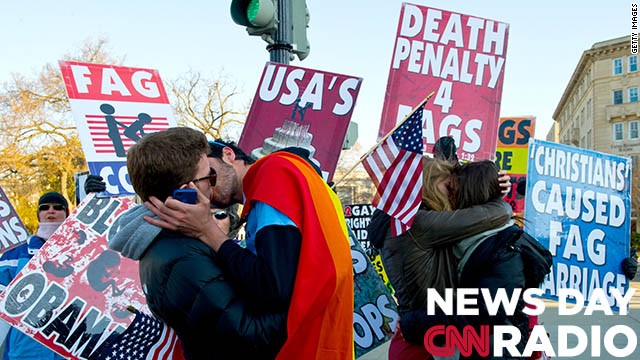 Two same sex couple kiss in front anti gay protesters at the US Supreme Court on March 27, 2013 in Washington, DC. The Supreme Court, for the first time, takes up the delicate and divisive issue of gay marriage when the nine justices consider the legality of a California ballot initiative that limits marriage to opposite-sex couples. Wednesday, the court will consider the 1996 federal Defense of Marriage Act (DOMA), which limits the definition of marriage to opposite-sex couples.
March 27th, 2013
04:37 PM ET

"It looks like there are five votes to overturn the Defense of Marriage Act. Anthony Kennedy, the swing vote so often, really seemed to believe that the law invaded state's rights to regulate marriage. And if he joins the four democratic appointees, DOMA is gone..."

"They had great optimism that Guantanamo would be closed.  They were devastated when the President backed off, at least their perception, of closing the facility."

"This is an election that is being watched across the world. Kenya is considered an anchor state for regional stability, regional economies, but it's also at the forefront against the fight against terror in this part of the world."