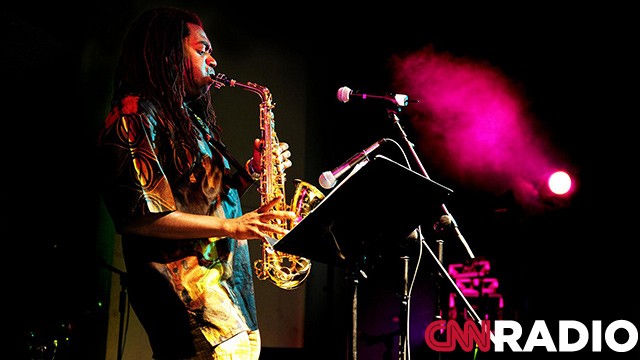 (CNN) – Cuba! Mysterious, musical, exotic.  It's the largest island in the Caribbean and perhaps the least known -  to Americans anyway, thanks of course, to the U.S. embargo of Cuba.  But, music has a way of traveling across the seas (or any barrier for that matter)  and straight to the heart.  Gema Corredera and Yosvany Terry are two of  the most renowned Cuban artists in the world as well as  friends and colleagues.

Gema (pronounced "Heh-ma") made her singing debut at the age of seven at the legendary Hubert De Blanc Theater in Havana. At ten,  she began studying classical guitar. Two years later she discovered Jazz when her teacher heard traces of Ella Fitzgerald's voice in her singing.  She explains:

[5:00] "My family who lived in the countryside, some members played the guitar...but, in my immediate family I was the only one who knew early on that I wanted to pursue music."

Saxophonist Yosvany Terry is legend on the jazz and contemporary music scene.  The New York Times credited him with "helping to redefine Latin jazz as a complex new idiom" when he landed in New York in 1999.

Their influences are many – Rumba, Bolero, Son, "Filin",  Afro-Caribbean rhythms, which combine to create a sound as lush as their homeland's tropical forests as verdant as its rolling hills as refreshing as its tropical blue waters.

Yosvany is the musical director of Gema's new C.D., Derramando Luz, which means spreading light.  But, Yosvany put out new music last year himself. His C.D., Today's Opinion, was voted one of the New York Times top ten albums of the year.

Josvany is described as a virtuoso saxophonist, playing both the soprano and alto sax.  He gives the credit for his musical prowess to his father, Eladio “Don Pancho” Terry, violinist and Cuba’s leading player of the chekeré, a handmade rattle crafted from a hollow gourd or calabash. Yosvany says,

[8:43] "Growing up my mom would take us to all the performances of my father's orchestra when he was in town...and being exposed to so much music at that time, so in that sense I can consider myself privileged..."

If you're lucky enough to be in Miami the weekend of April 6th, you can hear and feel the music for yourself! Gema and Josvany are performing at Saturday's finale of the sixth annual Global Cuba Fest. It's presented by FUNDarte and Miami Light Project to celebrate the roots of Cuban music.