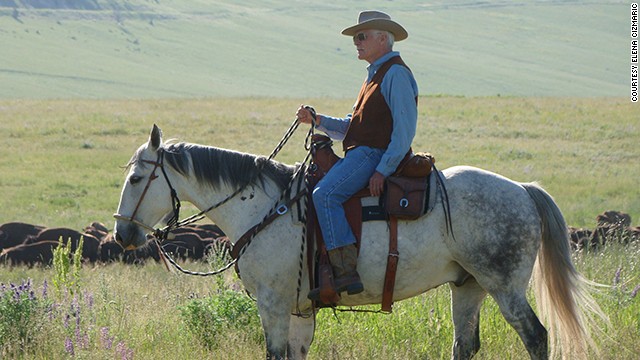 (CNN) - You wouldn't think Ted Turner needs an introduction. Especially to a CNN audience. But he does.

Despite Ted Turner’s fame and wealth and impact, we know so little about him.

Until now, for example, we've never seen the heartbreaking letter his father sent him when Ted was studying at Brown:

“My dear son, I am appalled, even horrified, that you have adopted Classics as a major. As a matter of fact, I almost puked on the way home today. I think you are rapidly becoming a jackass, and the sooner you get out of that filthy atmosphere, the better it will suit me…”

Soon after that letter, Turner’s father forced him to withdraw from Brown.

Ted did not want to leave Brown.

And he did not want to leave home for a string of boarding schools when he was only 4 years old. His father made him.

When Ted was just 24, his father committed suicide.

How could a boy, so rejected, suffering such a loss, find the inner strength to accomplish what he has accomplished?

Turner, the Classics lover, gave us a window on where he finds his inspiration. It’s from an epic poem called “Horatius at the Bridge.” [Hear Ted recite part of the poem at 9:00 in]

“Horatius at the Bridge” is set in ancient Rome. Invaders are approaching the city.

There is only one bridge across The Tiber. The Romans are retreating to the heart of their city, leaving the bridge standing — available for the enemy to swiftly advance.

Horatius, the solider, stands alone on the Roman side of the bridge, holding off the enemy.

When his fellow Romans see Horatius’ courage, they begin to support him, a trickle at first, then more, until there are enough of them to destroy the bridge and cut off the enemy’s access to their city.

Until now, we didn't know Ted Turner had committed the epic poem to memory. If you listen to the podcast attached to this story you will hear Ted recite it — no notes — with a spark and understanding that comes from experience.

“Has there been a time when you felt like Horatius?” I asked him.

But we did not invite Ted Turner to the house he built for an interview about CNN, an invitation we are honored he accepted.

The Ted Turner of CNN needs no introduction.

This story is about Ted Turner, the Eco-Capitalist. It's about the man who has demonstrated how to protect a large biodiversity of species on vast land holdings - and make enough money from that land to sustain his environmental conservation quest.

That Ted Turner needs an introduction.

That’s the Ted Turner who spent millions in the early phases of a struggling media business to support the work of the great oceanographer Jacques Cousteau when Cousteau and his son Philippe Sr. were determined to document the richness of the ocean that humans had never seen before.

That’s the Ted Turner who, inspired by the elder Cousteau, took his battle for environmental conservation to the West, accumulating the second largest private land holdings in America as a home for giant herds of the species he became fascinated with as a child: the Bison.

“Last Stand” is written by Ted’s fellow Montanan, Todd Wilkinson, a veteran journalist who specializes in the environment and joins us in this podcast.

Wilkinson has been covering the Ted Turner of the West since Turner bought his first ranch and started tearing down interior fences to give safe haven to species that other ranchers had fenced out as intruders on their bottom line.

Turner welcomed prairie dogs to his land — and expanded their population after decades in which his fellow ranchers had systematically exterminated them because they competed for resources with money-making cattle.

Turner and his team of land management biologists saw the prairie dogs for the unique value they provided — as a keystone species that is a crucial source of food for many other species. When prairie dogs are exterminated, other species starve to death.

The Eco-Capitalist’s new neighbors in the West didn’t like what they were seeing and hearing from Turner, the novice rancher, in the early 80s. That’s when Todd Wilkinson began reporting on him. It has taken a long time for Wilkinson to really get to know Ted Turner, and to witness the results of Turner’s definition of the bottom line.

With Ted Turner, there is not a single bottom line.

What’s a triple bottom line? How can you make a profit from the land and protect it at the same time?

Because Ted Turner — the Eco-Capitalist — does need an introduction.