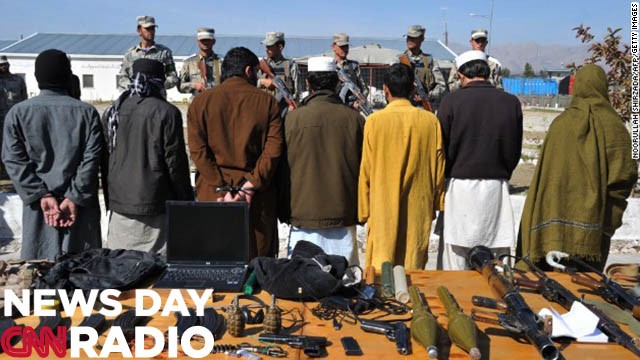 Taliban fighters stand handcuffed near seized weapons as they are displayed to the media at a police headquarters in Jalalabad on March 2, 2013. Seven Taliban insurgents have been arrested with their weapons by Afghan border police during an operation in Ghani khel District of Nangarhar province.
April 4th, 2013
04:52 PM ET

"Despite all the fighting, all the hundreds of billions of dollars that is being spent, the thousands of lives lost, U.S. is yet to win this war."

END_OF_DOCUMENT_TOKEN_TO_BE_REPLACED

(CNN) - This week, 35 former Atlanta Public Schools (APS) teachers and administrators, including the former superintendent, Beverly Hall, turned themselves into police. They were indicted on charges ranging from racketeering to theft, all tied to a district-wide cheating scandal dating back to 2009 test scores.  It's been described as the largest school cheating scheme in the history of the United States.

The teachers are accused of erasing and changing standardized test answers to improve scores. Those scores are tied closely to state and federal funding as well as teacher bonuses.

The arrests were another step towards closure of a three year saga that's left an indelible mark on Atlanta.

Errol Davis took over as superintendent when Beverly Hall resigned in 2011. It was only days before the cheating scandal became public.

CNN Radio interviewed Davis about his journey through the scandal and about changes he's made on testing security at Atlanta's public schools.

[3:03]  "We have put in clear expectations, we have trained people, we have put in testing protocols, we have automatic triggers now for investigations when we see test scores go in one direction or another."

Davis also started mandatory annual ethics training for all APS employees. He makes no excuses for the cheating scandal and when asked where the responsibility lies, he told CNN:

[4:07]  "It's a very simple mantra. All failures  are leadership failures and what I see in this entire milieu is failure at every level"

Before becoming superintendent of APS,  Davis was chancellor of  the University System of Georgia.  He had also been a Chairman of the Board at Alliant Energy Corporation.