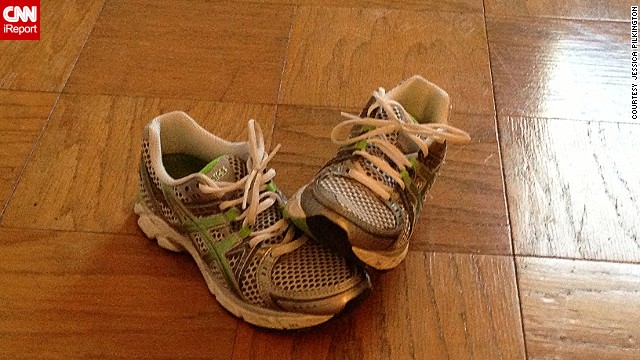 iReporter Jessica Pilkington posted a photo of her shoes to signify her commitment to running in response to the Boston terror attack.
April 19th, 2013
04:03 PM ET

After Boston, runners regroup and recommit

(CNN) - David Sarich had long finished the Boston Marathon when the bombs went off:

He's now back home in Atlanta. He's safe but the experience has left him shaken. He says at the time the bombs went off, most of the runners on the course were those running for a charity or for a family member:

[1:07] "Those are the people I usually run with. That I usually train with. I was just lucky to be further along."

Jeff Galloway had a flashback of his own when he heard about the attacks. Galloway competed in the Olympics in 1972, the year terrorists held athletes hostage. Eleven died.

[2:37] "The overwhelming reaction that the athletes had when we talked was, 'you can't take this away from us.'"

A similar sentiment to those coming from runners now, in the wake of the bombings in Boston.

For example, David Sarich lead a tribute run and the shoe store where he works has more planned;  CNN iReporters are uploading photos of their running shoes and sharing running goals; and from her home in Columbus, Ohio, Becca Obergefell is orchestrating a global commitment under the Twitter hashtag, #RunforBoston, so far over 17,000 miles have been logged.

For Galloway, this kind of reaction means a great deal:

[2:46] "When you see the reactions of runners, you get this wonderful feeling that you know humanity is going to make it."