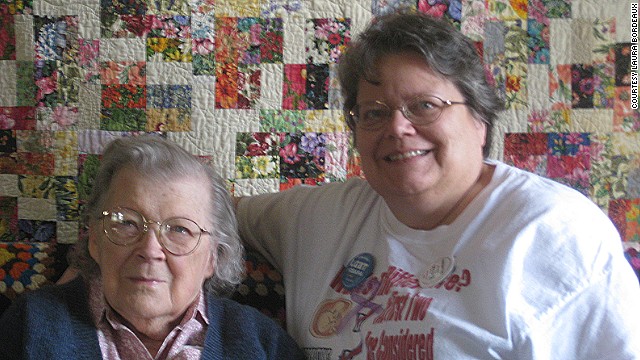 Peggy Casey and her mother Marguerite Stentz at their home in suburban Atlanta.
April 22nd, 2013
09:09 AM ET

Living with Grandma and making it work

Three years ago Peggy Casey found herself in a situation that's increasingly common in the United States. She needed to sort out elder care for her mother. So Casey went hunting for options. She found an assisted living home that she thought would do nicely.

[:46] "My idea was I'll pluck her out of this home that has all these problems and I'll put her down in this gorgeous place full of luxury and of course she didn't see it that way at all."

That's putting it mildly. Maguerite Stentz laughs at the memory:

Instead the women came up with another plan: Stentz would move in with Casey, her husband and their adult son. While the prospect of three generations under one roof might seem cramped, such arrangements are increasingly common.

According to the Pew Research Center, 16 percent of Americans live in multi-generational housing. Sally Abrahms has explored the issue for AARP Bulletin:

[2:21] "It's a way to save money because pooled finances go further. It brings families together. People are helping one another with elder care and children. You're building close relationships and it's a great way to avoid isolation in old age."

Still, it's not all easy. Abrahms says conflict can arise over chores, parenting, privacy and of course, finances. She advises people to sort out the details before a big move.

Also advisable? Listening, being flexible and having a sense of humor. That's something Maguerite Stentz has learned over her 93 years.