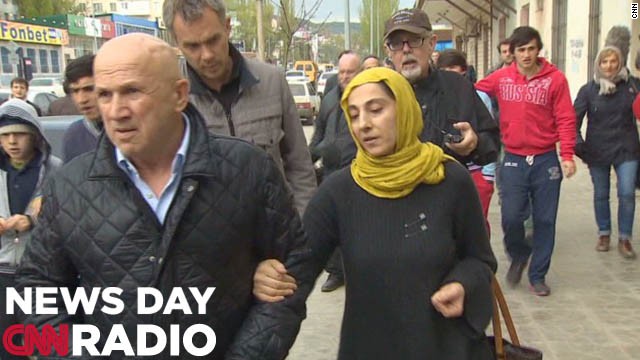 The mother of the suspected Boston bombers talks on the phone and later on the street with CNN's Nick Paton Walsh.
April 23rd, 2013
04:55 PM ET

The terror suspects' mother, however, is adamant that her sons had nothing to do with the bombings. CNN's Nick Paton Walsh is covering the story from the Russian Republic of Dagestan. He was able to talk to the mother on the phone yesterday:

"When I spoke to her in the late evening she was pretty much sure that this was a case of mistaken identity, and it was not Tamerlan, her eldest son who the FBI had shot dead. But as the evening drew on, she saw pictures online, social media, and recognized the dead body, deeply traumatic for her, of course – struggling I think, to absorb the enormity of the charges leveled against both of her sons..."

"People are afraid and wondering what's going to happen. You do realize that this border has been quiet basically since 1973, when there was fighting between Israel and Syria and when Israel annexed the Golan Heights. But some of the fighting has already spilled over into Israel..."

“I was thinking about doing simple things like being able to go to the bathroom by myself, or transfer from my wheelchair to a bed. How do I completely relearn everything I know about getting around, and sort of physical component of just... getting around in this world? That was really, really hard. I had no idea what that meant.”