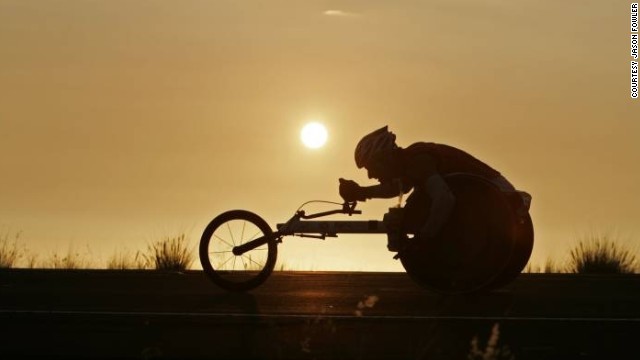 Loss of legs, not life

(CNN) – The first suspect in the Boston Marathon bombings is dead. The second has been caught and now faces a trial. But the wounds from that horrific day have not healed. More than a dozen victims had one or both legs amputated. Their lives forever changed.

In many ways, Boston's own Jason Fowler knows what that's like. He did race this year's marathon, but not by running. Instead, he was in a wheelchair.

In 1991, Fowler lost the use of his legs when he was 17 following a motocross accident while getting ready for his first professional season. Although his motocross career ended that day, it would turn out to be only a minor speed bump in his racing career.

Fowler would eventually become an Ironman champion in 2009, but that came after a long road of recovery and adjusting to a new way of life.

He shares his story and encouragement for those injured in the Boston Marathon bombing:

[5:20] "I know my injury is very different in the way that it happened with a motorcycle and really being my own fault. But I would say that it's similar in that you have to move on. One of the toughest things is taking that first step, and that's going to be really scary. It's going to be really scary to  learn to live with and come to terms with what other people would call a disability. I would tend to call it an 'ability' because it's going to enhance other senses and give you a quality of life that is very different. "