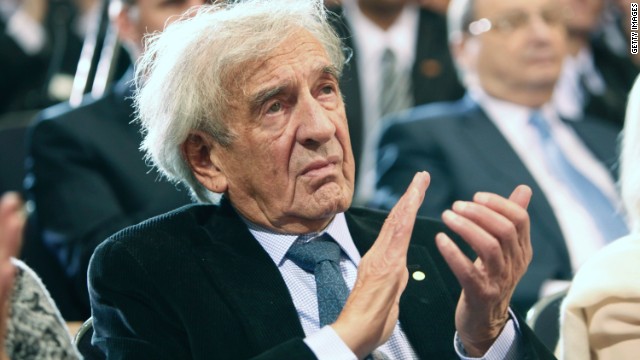 CNN Profiles: Faith in the messenger

Editor's Note: Today marks the 20th anniversary of the U.S. Holocaust Memorial Museum. It was Elie Wiesel’s idea to make this an institution of learning rather than a simple memorial. Michael Schulder, host of the CNN Profiles, sat down with Professor Wiesel to talk about a range of issues, including how a sense of humor survives in so many survivors. This story, though, is about faith.

Listen to the full interview in our player above, and join the conversation in our comments section below.

(CNN) - “They called him Moishe the Beadle, as if his entire life he had never had a surname.”

This is the opening line of the most widely read memoir of the Holocaust, "Night," by Elie Wiesel.

I had the opportunity to ask Professor Wiesel about Moishe the Beadle the other day when we sat down for an in-depth CNN Profile, which you can listen to here.

When Wiesel won the Nobel Peace Prize, the committee called him a Messenger to Mankind.

He is not the only Messenger to Mankind. But somehow the power of his story, and his words, and his character, made it possible for his testimony to have a global impact.

Moishe the Beadle was a messenger too. But the testimony he delivered was not received.

When Wiesel was a little boy, growing up in the town of Sighet, Moishe was the “jack-of-all-trades” at the local synagogue. The most menial job. The Beadle.

Moishe kept to himself. Few spoke to him. But young Eliezer Wiesel did.

Wiesel was very religious. And he often found Moishe chanting prayers. They struck up a friendship.

In 1941, Moishe and some other Jews who could not prove their nationality were deported by the Hungarian government.

Wiesel recounts to me what happened next.

“When he came back he began talking. Nobody listened to him."

Moishe said he had been taken to a forest in Galicia, Poland. What happened there? Wiesel remembers what Moishe said:

[8:34] “Terrible things. Jews. You don’t know what’s happening there. Jews are being killed. He said some people have to dig their own graves. And I was there, he said. He gave names. And I alone … came to tell the tale. Nobody listened to him. They thought he was crazy."

Wiesel continues: “The only one who listened was I. Not because I believed him. Because I loved stories.”

Three years later, the Nazis arrived. All the Jews of Sighet were rounded up. Barbed wire was put up.

“I saw him (Moishe) in the ghetto,” Wiesel told me, “with the last transport. He knew where we were going. But we didn’t.”

Another messenger arrived just before the Jews of Sighet were sent to Auschwitz.

“A Christian woman, Maria. Our friend and servant for years, came into the ghetto.”

She pleaded with the Wiesel family. She had a hut in the nearby mountains where they could be safe. “Come,” she told us. “I’ll take care of you.”

When Eliezer Wiesel and his family arrived at Auschwitz the name meant nothing to them, he tells me. They’d never heard of it.

[6:00] “Everything was so fast – and so well organized. Everybody knew what to do in order to lure the victims. Everyone. Everything worked. The machinery worked.”

And then, another messenger. This one, heeded.

An old prisoner came to the line saying “they will ask you questions. To me he said, ‘How old are you?'”

“He knew what we didn’t know,” says Wiesel.

“And then,” Wiesel recounts, “something strange happened to me."

"I come from a very religious background. Very religious. And all of a sudden, when I saw these hundreds and thousands of Jews coming, from all over Europe, speaking all languages, belonging to all cultures, to all conditions, men, women children, young and old, learned and ignorant …. I had the feeling that this is a Messianic event. The ultimate in gathering of exiles."

"The Messiah is coming…That’s what I felt."

"And who came was not the Messiah, but Death as Messiah.”

The story of what happened next is so thoroughly documented it does not need to be recounted here.

Wiesel tells me he retained his will to live in the death camps because his father’s life depended on the survival of his son.

Together, father and son survived Auschwitz. They survived the grueling transfer to another death camp, Buchenwald. And there they survived, until his father could survive no longer.

One morning Eliezer Wiesel woke up, and the bunk in the barracks where his father had been, was occupied by another inmate.

Elie Wiesel would survive, to become a messenger.

One of the first messengers whose testimony broke through into the broader public’s consciousness.

Now, on this day, as the U.S. Holocaust Memorial Museum commemorates its 20th anniversary, there are enough messengers, enough testimony, enough documentation, to absorb many lifetimes of study.

And just last month we learned something new and shocking from researchers at the Holocaust Memorial, who had spent years combing through documents for evidence others had glossed over.

They discovered that there were an additional 45,000 ghettos and concentration camps, some devoted to killing a small number of people – scattered all through Nazi occupied Europe – that we never knew existed. Which means more civilians than we even imagined knew.

How does faith survive such evidence?

How could God allow such a thing, the faithful asked, while it was happening and long after.