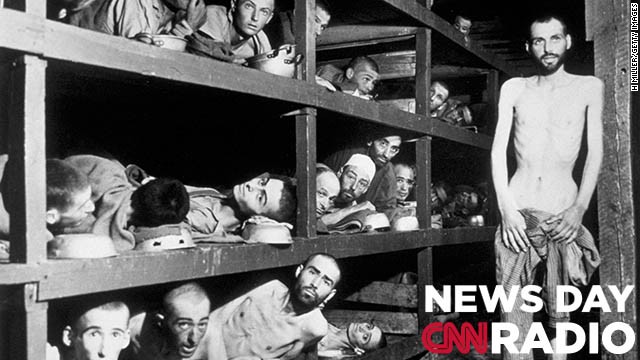 Victims of the Buchenwald concentration camp, liberated by the American troops of the 80th Division. Amongst them is Elie Wiesel (7th from the left on the middle bunk next to the vertical post) who went on to become an internationally famous writer, academic & winner of the Nobel Prize for Peace. Elie Wiesel speaks during the 20th anniversary National Tribute at the United States Holocaust Memorial Museum April 29, 2013 in Washington, DC. The Museum was hosting a two-day tribute event to honor Holocaust survivors and World War II veterans to mark its 20th anniversary.
April 29th, 2013
04:45 PM ET

"There was a report by the American Civil Liberties Union and Human Rights Watch that looked at solitary confinement of minors across the country and found dozens of cases..."

"I wrote then one sentence and now my words are here, engraved in stone, at the entrance to this edifice. And, those words are 'for the dead and the living, we must bear witness' "

“There was one moment when they played a slower song and some people were kind of joke dancing, but over in the corner it started with two people holding hands, and then two more people joined and then a few more people joined. And by the end of the song everybody was in a giant ring around the room just holding hands and swaying to the music. It was hard to tell if it was planned, but it was really sweet to witness."