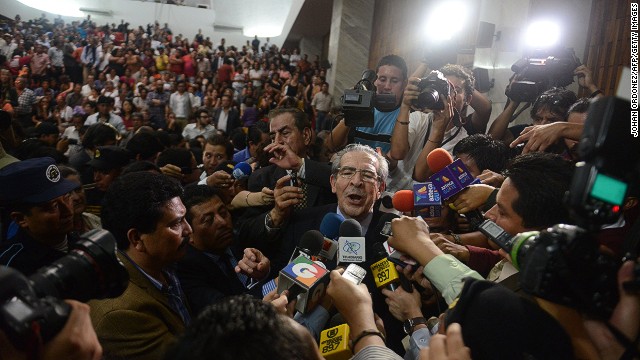 But the story of Guatemala's violent decades goes beyond Montt. The conflict itself has its roots with land reform, the domino theory and bananas, according to Dr. Virginia Garrard Burnett:

[0:13] "It's a sad but really interesting cold war parable," she says. "It all started in the 1950's when Guatemala's president tried to institute land reform. The single biggest land owner in the country was the American-owned United Fruit Company."

The company was well-connected, the CIA got involved and the president was toppled in a coup. That's also when violent clashes between the military on the right and guerrillas on the left began. Rios Montt came to power in 1982 and embarked on a scorched earth campaign. During Montt's 17-month rule, some 1,700 indigenous Ixil Mayans were killed.

Montt was ousted in 1983 but went on to serve in Guatemala's parliament  He had immunity until he resigned last year. Journalist Xeni Jardin was in the court for portions of the seven-month trial. She says the verdict is important, but:

[5:14] "The resolution of the court did not lead to some utopian instant peace where everyone is happy and mellow and feels good about each other, it's quite the opposite."

In fact, an appeal seems likely and, already, many have spoken out against it, including Guatemala's current president.

For now though, it's justice delayed, but not denied, in Guatemala.