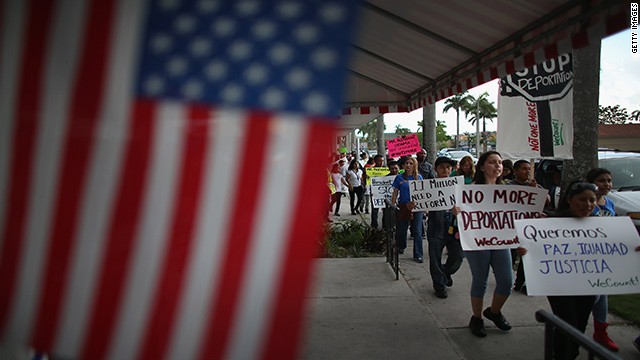 Undocumented immigrants with US-born children worry that deportations will break up their families.
May 17th, 2013
12:18 PM ET

A mother's daily fear in the land of opportunity

(CNN) - A quarter of the estimated 11-million illegal immigrants in the U.S. live in California. That's according to a recent study from the University of Southern California. The study also shows that in some parts of Los Angeles, one in three people have no legal right to be there.

[1:10] “When you are so poor and you don’t even have three meals a day, the only thing you think about is going to a place where you’ll be able to feed your kid. You don’t even realize that there is a border to cross. You don’t know that.”

Isabel Medina crossed into the U.S. from Mexico illegally in 1996, with her husband Felipe and then 1-year-old child. Since arriving 17 years ago, she’s had two other children who are lawfully U.S. citizens. Her family receives no government subsidies; no welfare, no food stamps, nothing. They do take advantage of the public school system. She lives with the daily fear of her family being broken up.

[3:40] “Every single day when I wake up I just say 'God help me.' And I’ve seen how some families are being separated and they struggle so much.”

Her husband has no driver’s license but drives to his factory job every day. She knows that if he’s pulled over for even the slightest traffic violation, Felipe could be deported. Like other illegal immigrants with U.S. citizen children, Medina hopes congress will grant her a way to remain in the United States legally and without fear.