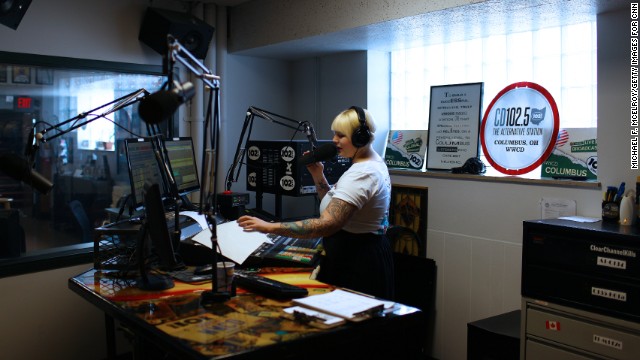 Columbus, Ohio (CNN) - Columbus, Ohio's WWCD-FM is a throwback. It's one of just a handful of independent, major-market commercial music stations left in America.

If the state of radio in the country seems bleak, that's not something you can sense when speaking to the staff at WWCD, dubbed, "The Alternative Station."

I traveled with CNN.com writer Todd Leopold for his story on the state of commercial music radio in the United States and we wanted to capture a day in the life of one the last truly unique stations left.

From the on-air talent and sales folks to the station's president and general manager, Randy Malloy, the message at WWCD is clear:

[:31] "I put a very cognizant plan in place to express to the world that, 'Hey we're here and we're not going anywhere!'"

DJ Brian Phillips started at the station in 1994, then left, and then returned a few years. He explains why WWCD has been able to survive  by playing by their own rules and not being phased by industry trends:

[6:14] "There are Top-40 stations - they'll play their tightest rotating songs once an hour. That's insane to me! Yet, that's the way the industry thinks: 'Play the hits! Shut up and play the hits!' What we're trying to do is just play cool music for people who dig this kind of music."