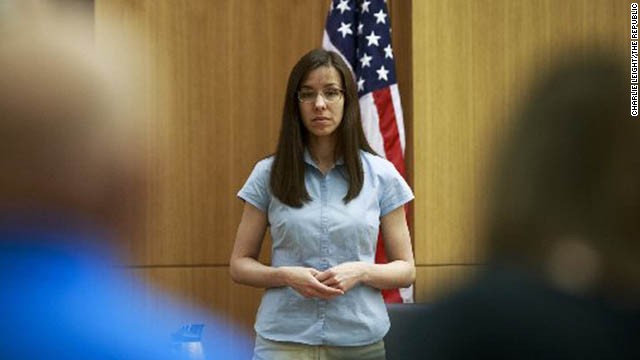 Who cares about Jodi Arias?

(CNN) - The 12 people who unanimously convicted Jodi Arias of first degree murder earlier this month are having a little more trouble deciding whether she should live or die. They've been mulling it over all week, and if they can't come to an agreement, Arias could get a new trial with a new jury.

Twelve new people who will have to make that life-or-death decision.

As the country awaits an answer to that giant question, we wanted the answer to a different one. Why is this case so dang popular?

CNN's sister network HLN has been leading the coverage of the trial since it began on January 2, and it's been a big ratings boon.

We met up with HLN After Dark Executive Producer Jennifer Bernstein on a television set that may just make television history: a life-sized model of Travis Alexander's apartment where Jodi Arias murdered him.

Bernstein told us about the thought process behind the display's creation:

[0:41] "In recreating this killing scene, which is something unusual for HLN, we hadn't done something to this scale before – we had concerns about going too far and what is that line that you cross. So, to be honest with you, there was a lot more blood in that crime scene. This was a man who was stabbed almost 30 times, his throat was slit. He was shot. So you can imagine there was a lot of blood in that crime scene. And when we first built this we had a lot more red paint marking the blood. After meeting, we decided it was too much so we actually painted back over it to scale it down."

Bernstein says she thinks HLN viewers who have gotten wrapped up in the case are very smart. She describes them as couch jurors and psychiatrists:

[2:26] "Along the way they've emailed very detailed questions and observations, sometimes observations that our own trial experts hadn't picked up on. Everything we've done has been in response to their involvement. So, we've seen a huge interest online and acting as that 13th juror, with people giving their take and, if they were on the jury, what questions they would be asking."