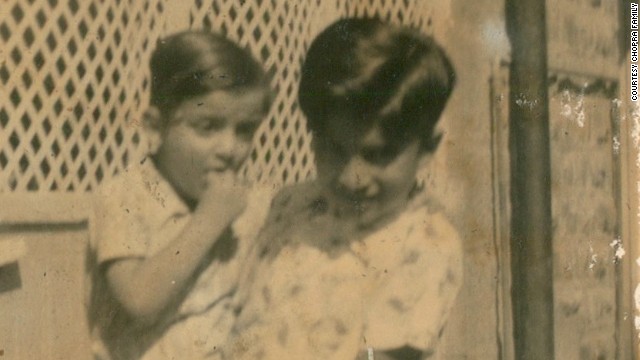 (CNN) - Once upon a time (and this is a true story even though it begins "once upon a time") there was a physician in India who had amazing ears.

His name was Krishan Chopra. He was a cardiologist with the Indian Army.

His ears were so sensitive that, through his stethoscope, he could hear and time the milliseconds between parts of a heartbeat that, today, doctors must use an EKG to measure.

Dr. Chopra had two sons. Deepak was the older. Sanjiv the younger.

Krishan Chopra and his wife, Pushpa, were away from home a lot because of Dr. Chopra’s assignments with the Army.

But the Chopras had a big extended family who surrounded the Chopra brothers with love.

When Dr. Chopra and his wife were home, their sons would witness a weekly procession of patients come through their home from near and far.

The Chopra Brothers would watch as their mother would greet the patients and observe them to get a sense of who they were as individuals. She would share her insights with her husband.

If a patient of little means passed through the Chopra home, that patient would often leave with a home-made meal.

Dr. Chopra’s powers of listening were not, of course, limited to the stethoscope.

“My father,” Deepak Chopra tells me, “was also a good listener to his patients’ stories. He heard them out … because unless you know the story you don’t know the context in which the illness is occurring.”

These listening skills helped Dr. Krishan Chopra diagnose illnesses that others could not. His diagnostic skills enabled him to prevent his younger son, Sanjiv, from going blind – a story which you will hear in this CNN Profile.

I guess, with such an example, it made sense that the Chopra brothers would one day earn admission to the finest medical school in India.

But nobody could have predicted they would one day leave the country that nurtured them to carve a new path in America.

As you may know, Deepak Chopra has gained fame with his switch from traditional medicine to a focus on the connection between mind and body and spirituality as a path to well being.

Deepak’s brother Sanjiv has pursued the more traditional route: as a Professor at Harvard Medical School where he is Faculty Dean for Continuing Medical Education.

And now, the two brothers, have published a gripping memoir called “Brotherhood: Dharma, Destiny and the American Dream." Each brother wrote the chapters of his life without sharing them with the other brother – until the book was ready for publication.

What did the Chopra Brothers learn about each other from this exercise?

What did they learn about themselves?

What did they learn that can help us improve our own lives?