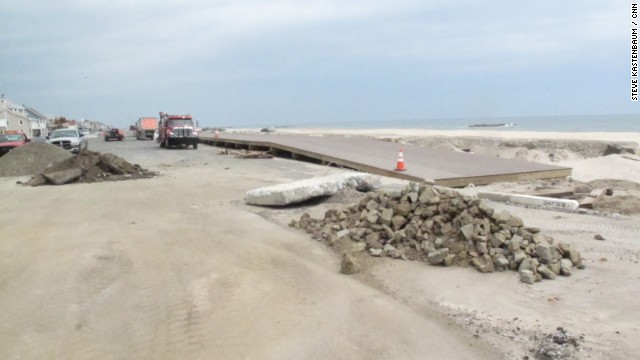 Sandy-damaged beaches prepare for summer crowds as Belmar, New Jersey rushes to finish a new boardwalk.
May 24th, 2013
10:07 AM ET

What awaits beachgoers at Sandy-damaged beaches

(CNN) -  There’s a mad dash as the Jersey Shore and the beaches of New York prepare for beachgoers.

The summer season gets under way this Memorial Day weekend and, in the wake of the recovery from super-storm Sandy, conditions vary depending on where you choose to set down your beach blanket.

In Belmar, New Jersey, Sandy demolished the boardwalk and all of the businesses along it. But Mayor Matt Doherty says they've come a long way since then:

[1:26] “Epic Construction came in and built this 1.3 miles of boardwalk through the winter in a little over four months which is phenomenal. Performing work outside seven days a week up against the Atlantic in January, February and March is difficult at best. But they did an outstanding job and it’s because of them we’re going to have this boardwalk built in time for Memorial Day Weekend and this summer."

It’s a much different picture in the Rockaways on the south shore of New York City. Of the more than seven miles of boardwalk destroyed by Sandy, very little has been repaired:

[3:43] “I think people don’t realize the devastation that took place in the Rockaways and it’s still like that," said Johanna Sena at the Rockaway Beach Surf Shop.

Her community will get a much needed boost when subway service is restored to the peninsula in a few days.