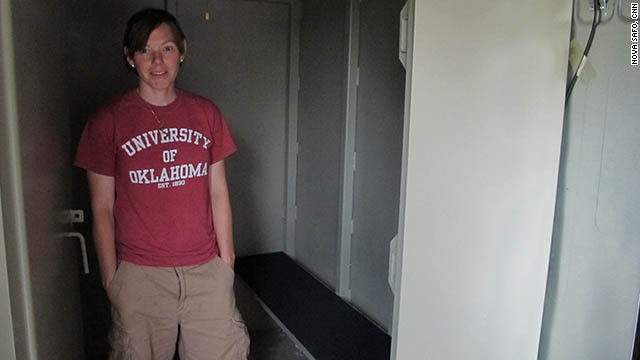 [1:16] "What’s the odds of having two F5 tornadoes in your lifetime? You don’t expect that. A structure like this would withstand an F2 or 3, you know. It’s kinda how we’ve done things."

There appear to be the beginnings of a cultural shift here. A monster tornado is now no longer a 100-year-event. Tasha Hames lives in the neighborhood that was spared by the tornado. She says her family is one of the few in town who have a storm shelter. It’s in the garage:

[3:17]  "Ours is above ground. It’s the armor. Kind of like what they use for military vehicles. And it’s bolted to the ground and the cement."

It’s a small metal bunker about 6-by-5 feet. With a heavy metal door.

[3:35]  "When the storm first started we shut off all three locks. And it just vibrated and shook while we’re in here.”

Other families were also in the shelter and Hames says the experience showed them how important shelters are.