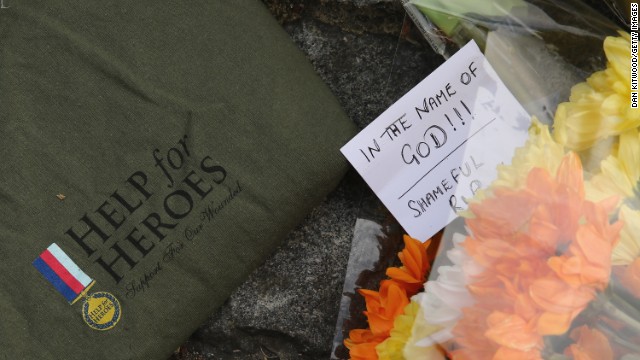 Notes and shirts sit outside Woolwich Barracks on May 23 – after a Muslim extremist killed an off-duty soldier who was wearing a "Help for Heroes" shirt when he was killed.
May 30th, 2013
09:03 AM ET

(CNN) - Remi Brulin loves tracking the way America thinks about and talks about terrorism. He’s been doing it for years. He’s a visiting scholar at NYU’s Journalism Institute.

[1:47] Most people sort of agree on what terrorism should be. There’s violence of course, or the threat of violence. There’s the political aspect of it – and then there’s the issue of the target. Most people would agree the targets have to be civilians or non-combatants. There is a sort of agreement – until you start applying it to particular cases.

Then, Brulin says, all bets are off.

One reason is, no one can quite agree on a definition. A corollary of that is: it’s hard to keep politics out of it.

Bruce Hoffman, a terrorism expert who’s director of Georgetown University’s Center for Security Studies, remembers following the media coverage when Chechen terrorists laid siege to a school in Russia in 2004.

[3:34] All of the newspapers went out of their way to avoid using the word ‘terrorists’ and to call them fighters, militants, separatists. And I thought to myself, Gosh, if a bunch of armed people taking over a school with children – forcing children and their parents and their relatives and their teachers to live in horrible conditions for days on end, threatening them with death – I mean, if that’s not terrorism, what is? And yet, almost no newspaper of record or major media would call them terrorists.

That’s because the Chechens were fighting Russia – and at the time, Russia was no friend of the U.S.

Now, Hoffman says, terrorism has become a subjective term. He thinks there’s almost a fear of using the word and triggering a reaction – that’s a legacy of the 9-11 terrorist attacks.