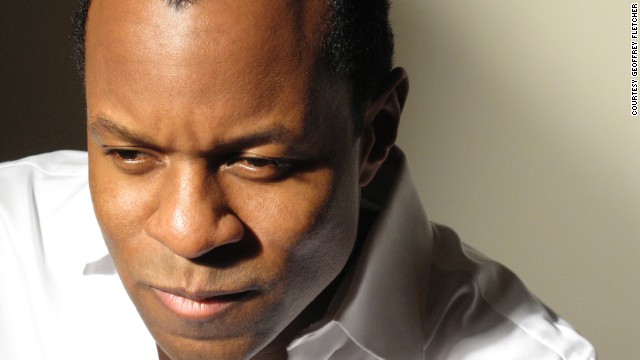 When Geoffrey Fletcher was about 13 years old his father sat down beside him to teach him about F-stops on a camera. F-stops help determine how much light gets through the lens.

That moment, of a father sharing a hobby with his son, came back to Geoffrey Fletcher during this CNN Profile and moved him, as it will most anyone who hears him recount it.

Fletcher’s dad died when Geoffrey was only 19. But a deep foundation of a secure, loving household for Geoffrey and his two brothers was well established.

That foundation must have helped Fletcher get through what was to come after he graduated from film school.

A Decade of No’s. Ten years of trying and failing to get his screenplays made into movies that sold.

Painful but probably essential, he says, to execute the project that came his way as he approached 40. Fletcher was tapped to write the screenplay for a movie about a girl as far from his personal experience as one could imagine – an abused, illiterate, desperately poor teenager determined to change her course. Her name was Precious.

Precious earned Fletcher an Oscar in 2010. His mother was a witness. Surround Sound Affirmation.

If I didn’t have to screen the movie to prepare for this conversation with Geoffrey Fletcher, I might have overlooked it.

I didn’t think I had an appetite for a story about two young killers.

Now that I have seen it, in addition to being thoroughly entertained, I feel wiser.

Violet & Daisy, the girls who are paid to kill, actually taught me something important about – of all things - parenting.

The parenting and other wisdom of this movie does not reveal itself quickly or in expected ways.

This movie looks unique – somewhat like “a graphic novel” is how Fletcher describes it.

The pacing is different.

The sound is different.

The silence is different.

The humor is devilishly different.

Violet and Daisy are different from your daughters. Although not entirely.

Because Violet and Daisy are on a journey. Their starting point, I hope, is as far from your teenager’s starting point as you can imagine. As far from Geoffrey Fletcher’s own charmed childhood as Precious was.

But it is a journey, as Fletcher describes it, toward humanity.

And, for many, the wisdom Violet & Daisy imparts about our most important relationships will have the urgency of what the military calls actionable intelligence.

A long time ago, Geoffrey Fletcher’s father taught him about F-Stops on a camera.

With Violet & Daisy, Fletcher helps us discover new ways to let light enter our own lenses.

It took a man with great empathy and caring and confidence to accomplish this.

It seems that F-Stop moment between a father and his 13-year-old son was about more than photography.