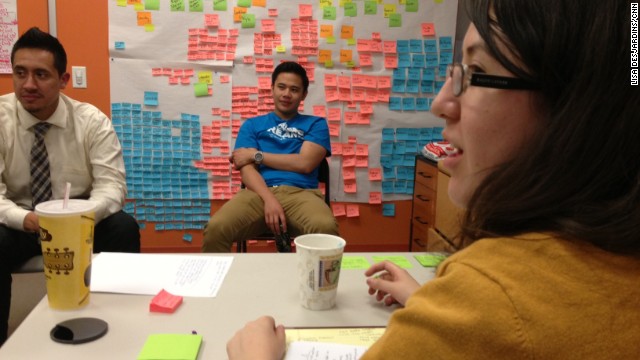 Maricela Aguilar leads a United We Dream meeting in the room where the group tracks members of Congress by post-it notes.
June 13th, 2013
10:03 AM ET

(CNN) – The U.S. Senate has officially begun the debate on immigration reform. However, it is only the last, and perhaps least, vocal step in what is a largely unseen and incredibly massive push and pull immigration from outside the Capitol.

[:43] "I think we should have a massive tweet attack on (Senator) Rubio," 22-year-old Maricela Aguilar suggested to her fellow staffers at United We Dream Wednesday.

The group is made of young Americans who were undocumented until President Obama created his Deferred Action for Childhood Arrivals program that grants temporary waivers to those who were brought into the country illegally as children.

In just the past two years, pro-reform United We Dream has grown from operating out of a single cubicle in Washington to taking over a good chunk of one floor on K Street.

A few blocks down the road, the Center for Immigration Studies, which opposes any legalization for undocumented people, is also a player in the debate.

Unlike United We Dream though, which focuses on activism and events with publicity, CIS has spent years doing research, hoping to guide debate consistently and with numbers.

[2:53] "We have to prepare for this sort of thing for, you know, years. And have," said CIS executive director Mark Krikorian.

For more on how these two players in the immigration debate work, listen to our story in the player above. Subscribe to this podcast on iTunes or Stitcher. And listen to CNN Soundwaves on our SoundCloud page.