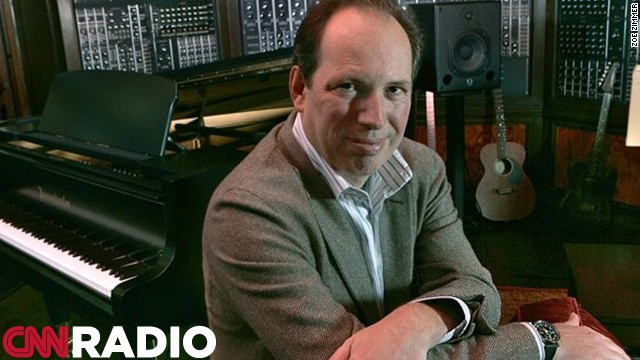 Editor's Note:  Welcome to CNN Radio Music Notes – your backstage pass to all things music!  From intimate conversations with headliners to the latest scoop on your favorite Indie band, hang out with us to find out what's happening in the world of music.  Listen to the full story in our player above, and join the conversation in our comments section below.

(CNN) – The latest Superman movie, Man of Steel, is now in theatres. Its soundtrack music was scored by Hans Zimmer, one of the top movie composers in Hollywood. He's one of the busiest, honored, and well-known in the business. Zimmer has scored music for more than 100 movies. That list includes Inception, Gladiator, Crimson Tide, Pearl Harbor, The Lion King, and the three most recent Batman movies – two of which he co-composed with James Newton Howard. But it's not just the high-octane action movies – Zimmer's also written music for romantic comedies, like As Good As It Gets and Something's Gotta Give. .

Zimmer says before he starts a new movie, he has to fight through the same process:   .

[3:14] "The blinding fear of the blank page. There was a lot of procrastination and re-evaluating one's self worth and all that."

He found a musical center for Man of Steel after having the movie's director, Zach Snyder, listen to a few ideas he's scribbled on some post-it notes. And in thinking what the superhero represents:

[1:38] "The clue, the hook for me, the way in was isn't it about time we just put our cynicism aside a little bit and just celebrated honest people – folks, farmers, people that leave their doors unlocked in the Midwest, people who don't make the news. This idea of where do you belong, who do you listen to, and ultimately this sort of quest which I think all of us in one way or another have – how do you become more human?"

Hans Zimmer spoke to CNN's Edgar Treiguts about the art of movie composing, that 'fear of the blank page', and finding his way into the Man of Steel music universe.