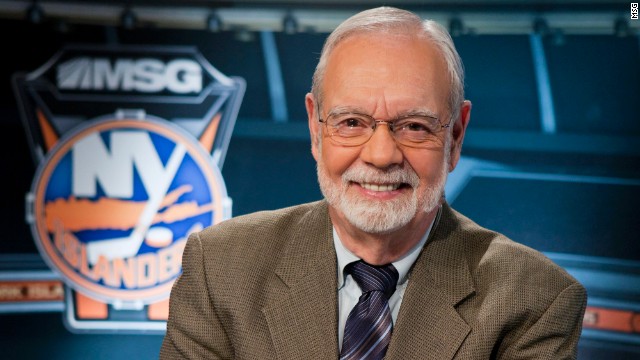 (CNN) - When it comes to hockey, my brain is like an ice rink that has just been cleared by a Zamboni.

I don't have a single groove of knowledge.

I'm tired of living this way.

The tipping point came the other night when my 9-year-old daughter and I were channel surfing and stumbled upon the game 3 sudden death overtime of the Stanley Cup Finals.

We were riveted. So many big guys skating so fast, turning on a dime, getting pounded down and bouncing back up, breathless announcers ....

My daughter had so many questions.

And I couldn't answer a single one.

Starting with the most basic question: Where is the puck?

The game was moving so fast, my daughter said she would not blink for the rest of the game so that she wouldn't miss the winning goal. As she was demonstrating how she'd keep her eyes wide open Boston scored. Game over.

That was it. Enough ignorance.

I called my good friend, Bryant McBride, a former NHL executive who was a hockey player himself.

Who can give me a Hockey 101, I asked. A colorful one. I don't want the stats. I want wisdom. I want to understand what I'm watching.

Without hesitating he said Stanley Fischler.

Fischler is a commentator for Madison Square Garden – MSG Networks. He is 81. He rode his bike 40 blocks to CNN Headquarters for this interview.

Fischler was at the very first game in which a goalie wore a mask to protect his face. The goalie's coach told him not to wear it. This is a macho sport. But the goalie insisted. That was the year I was born. My mother would have had me wear a facemask every day if she could have. But that's another story.

So the facemask changed the art of goaltending, Fischler tells me, from one driven by fear, by protecting yourself from a puck to the face, to one driven by athleticism.

Oh – I was wondering, is it just me or does the rink seems crowded. These guys skate so fast and have so little room for maneuver? Am I just imagining this?

No, Fischler explains. When the NHL was created, and the rink size established, the average player was about five foot seven and 160 pounds. Now, he's six foot two and more than 200 pounds.

"There really isn't a lot of room to maneuver," Fischler says, " which is what makes it all the more dazzling, because they do seem to maneuver and yet there's hardly any space."

There is a move to make NHL rinks bigger. The owners don't want to. You'll find out why in this CNN Profile.

After this conversation with Stanley Fischler, I couldn't wait to watch game 4 of the Stanley Cup Finals the other night with my daughter. I had a lot of answers for her. We even noticed things the announcers either didn't see or care to point out.

Like the Boston player who threw his body down on the ice to block a slapshot. He was willing to take a hit of vulcanized rubber travelling as fast as 100 miles per hour at close range to prevent a goal. Fischler alerted me to watch for this self-sacrificing move. It amazes him. In this case the puck just missed the diving player and sailed into the net to tie the game at 5-5. A few weeks earlier another player did the same thing and the puck broke his leg.

And the fighting. Why so many fights? Sometimes, Fischler tells us, it's retribution for an illegal blow with an elbow or the butt of a stick that the ref misses. And who can blame these refs for not seeing everything. They've got to watch the puck and the players while making sure they don't get smashed by a guy skating fast enough to get a ticket in most towns.

Normally I wouldn't give away this much information in a CNN Profiles introduction. But Stanley Fischler is a bottomless cup of hockey anecdotes and insights. Which is why we are letting this conversation go 40 minutes long. The length of two hockey periods.

We hope you click the play icon above and enjoy getting to use your new set of hockey lenses to watch the rest of this amazing Stanley Cup Finals.

For my part, I'm going to keep that Zamboni away from my mind.