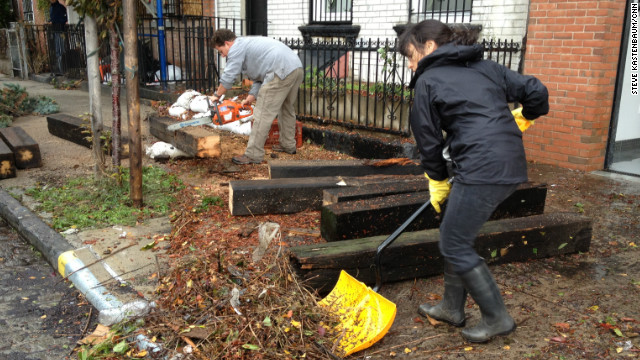 Jeremy Armstrong cuts up the timbers while a friend shovels debris in front of his home in the Red Hook section of Brooklyn.
October 30th, 2012
07:30 PM ET

Cleaning up, one block at a time

(CNN) – At the height of Superstorm Sandy, the neighborhood of Red Hook in Brooklyn was indistinguishable from the waters of New York Harbor.

Jeremy Armstrong returned to his home there Tuesday to survey the damage, and get to work. His house is two short blocks from the waterfront.

[1:18] “It was just madness. I mean just everything… I mean the timbers that you see here that I’ve been cutting floated all the way down from the Erie Canal Basin. These are part of the old bulkheads. They’re all tarred timbers. These timbers are probably, I don’t know, 150 years old...”

As he cut timbers with a chainsaw, neighbor Megan Davidson washed away a mixture of sea water and sludge from a garage.

[1:52] “All of us cousins and brothers and sisters are here to clean up today. The garage was barricaded by trash basically, you know… beer bottles, construction material, huge pieces of fencing that had fallen down…”

Armstrong is hoping that Sandy was a once in a lifetime storm.

[2:35] I had lots of conversations with people who’ve lived in the neighborhood for 30 and 40 years who said the water has never come up to a certain point that really represented any danger. Those were conversations that we had right before hurricane Irene. So it certainly seem like, based upon past history and even the storm last year, that nothing like this would be possible.”

Editor's Note: Listen to the complete story about the cleanup effort in the player above.